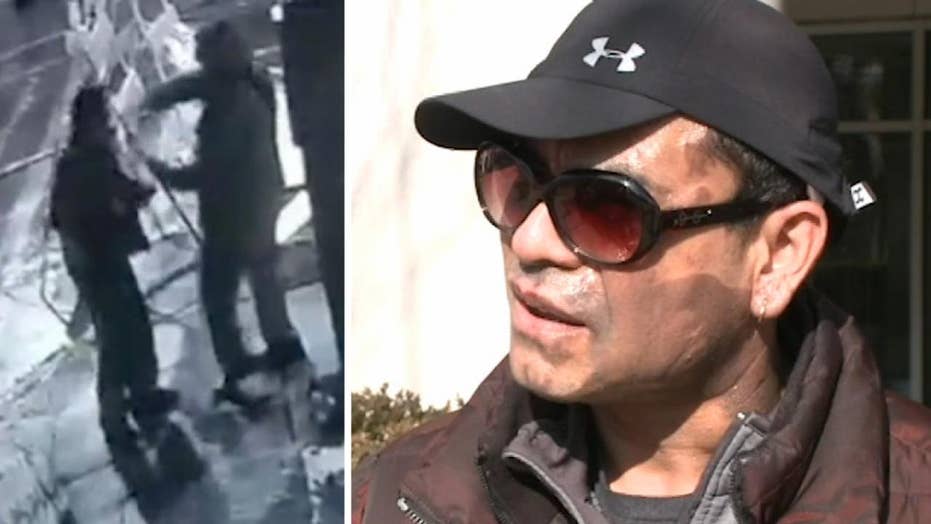 Prosecutors on Wednesday charged a white Milwaukee man with a hate crime for allegedly throwing acid on a Hispanic man's face last week.

Clifton Blackwell, 61, was already facing a charge of first-degree reckless injury. The authorities added hate crime and dangerous-weapon charges that could increase his sentence if he's convicted.

The victim, Mahud Villalaz, a 42-year-old naturalized U.S. citizen who was born in Peru, said his attacker approached him near a restaurant on Friday and confronted him about parking too close to a bus stop, charging documents say.

Prosecutors said Blackwell asked, "Why did you invade my country?" and, "Why don't you respect my laws?"

Villalaz said he moved his car but Blackwell continued to berate him, calling him "illegal" and telling him to "go back, go back.”

Surveillance video from the restaurant recorded the attack, which left Villalaz with second-degree burns on his face. Investigators who searched Blackwell's home found four bottles of sulfuric acid, muriatic acid, and two bottles of Kleen-Out drain opener, according to the search warrant.

Blackwell does not yet have an attorney, according to court records. His family said he’s a Marine Corps veteran who served during the U.S. invasion of Panama in 1989. A Marine official told The Associated Press that the branch has no record matching Blackwell’s name and birthdate.

His mother, Jacqueline P. Blackwell, told The Journal Sentinel he had sought care with the Department of Veterans Affairs in Milwaukee for post-traumatic stress.

State court records show Blackwell was convicted in a 2006 Rusk County case of false imprisonment and pointing a gun at a person in a case where he held four hunters at gunpoint because they were on his property.