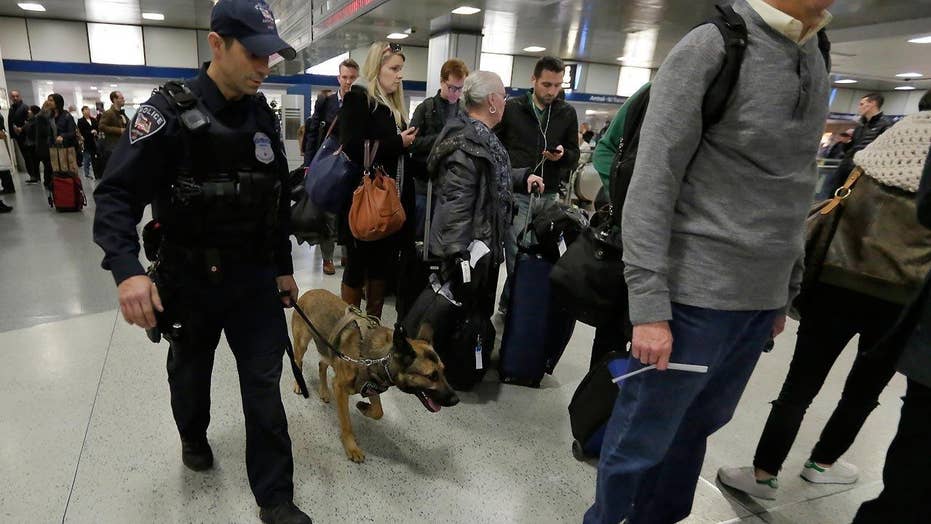 AAA estimates 3.6M Americans will be flying for Thanksgiving

Millions of Americans started their Thanksgiving getaway Wednesday by taking to the roads and airport security lines, undaunted by terrorism fears as officials continue to stress there are no “credible” threats in the wake of the Paris terror attacks earlier this month.

President Obama said at the White House there is no "specific and credible" intelligence indicating a plot against the U.S., while assuring anxious Americans, "While the threat of terrorism is a troubling reality of our age, we are both equipped to prevent attacks and we are resilient in the face of those who would try to do us harm."

Homeland Security Secretary Jeh Johnson echoed Obama's statement that there are no specific, credible treats to the homeland ahead of the 2015 holiday season.

Johnson's remarks came at a press conference Wednesday afternoon at Washington DC’s Union Station where he boarded an Amtrak Acela train up to Newark, N.J. to head home for the Thanksgiving holiday.

Johnson told reporters that DHS and its federal, state and local partners are expressing continued vigilance in securing the homeland and continue to work overtime to monitor threats.

When asked how much credibility he places in the no specific, credible threat assessment given concerns surrounding encrypted communications and the going dark phenomenon, Johnson  noted that law enforcement assets are reinforcing security measures around the county and acknowledged concerns surrounding lone actors.

He also urged the public to be vigilant this holiday season and to be aware of any suspicious activity and to express thanks to those working in law enforcement who will work through the holidays.

Nearly 47 million Americans are expected to take a car, plane, bus or train at least 50 miles from home over the long holiday weekend, according to AAA. That's the most travelers since 2007, a rise attributed to an improving economy and the cheapest gasoline for this time of year since 2008.

In the West, drivers faced fresh snowfall in California's Sierra Nevada and rain in the San Francisco Bay Area, while motorists in Montana and Wyoming were warned of icy roads after wintry storms moved through. Travelers heading out on Thanksgiving Day could see 8 inches of snow in the Denver area.

Anyone heading to a major airport should factor in 50 extra minutes on the road, according to the traffic data company INRIX, in addition to time spent going through security.

Pat Flynt told the Associated Press he had the recent terror attacks in Africa and Paris on his mind as he waited to get through a checkpoint at the Atlanta airport for his flight to visit a sick uncle in Baltimore.

"Hopefully there are no issues. That's my main concern," he said. "But with what's been going on recently, I don't care how long they take. I just want to be safe."

In New York City, fears that Islamic jihadists could use the Macy’s Thanksgiving Day parade as an opportunity to unleash a deadly attack have law enforcement ramping up security even as officials assure tourists that there is no specific threat to the city

On Sunday, hundreds of emergency responders simulated a subway terror attack, which included an “attacker” wearing a suicide vest.

"In New York City, we are, at this time, very well-prepared and continually improving that preparedness," Police Commissioner William Bratton said Sunday.

An NYPD spokesperson told FoxNews.com that there is no specific threat against the city, although there will be a larger visible presence in the city. The Associated Press reported that security in the subways, Times Square and other prominent sites have been bolstered.

Bratton said that thousands of officers, including 1,300 counterterrorism officers, will patrol the parade route.

A spokesman for the Port Authority of New York and New Jersey told FoxNews.com that authorities will be on high alert around Thanksgiving.

"As the Thanksgiving holiday weekend approaches, the Port Authority Police Department remains on heightened alert at all of the agency's bridge, tunnel, rail, World Trade Center and other facilities, following the recent tragic terrorism incidents in Paris and elsewhere,” the spokesman said.

“Actions include increased patrols and checks of bags, buses, trucks and trains at agency locations. Travelers also are reminded to remain vigilant and report any suspicious activities to police or other authorities,” he said.

On the federal level, Fox News is told that a bulletin went out Monday to federal, state and local law enforcement on the lessons to be learned from the Paris attacks.

Fox News is told that the bulletin places heavy emphasis on the vulnerability of U.S. soft targets, specifically ISIS' demonstrated ability to target beyond "government, military and law enforcement officials and facilities."

The bulletin also spoke to the "high degree of operational security" demonstrated by the Paris attackers.