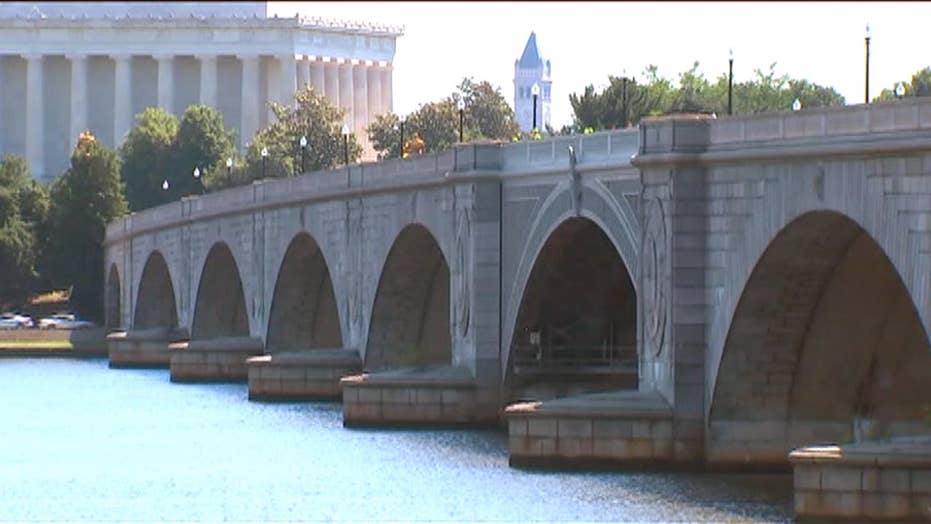 How did the Arlington Memorial Bridge fall into such a state of disrepair? Douglas Kennedy reports

Laurin Lineman is on his knees directly over the center span of the Arlington Memorial Bridge that connects Washington D.C. and Virginia.

Lineman is the chief of engineering for the Federal Highway Administration and he is examining a 12-foot crack on the bridge’s eastern sidewalk.

“Check it out,” he tells a Fox News reporter. “It's starting to deteriorate and come completely apart.”

Indeed, parts of the concrete crumble to the touch.

“The support beams below are also deteriorating and are corroded,” he said.

The concrete in the nine arch spans of the Arlington Memorial bridge have been deteriorating for decades. But it’s the center span that’s most critical. (Reuters)

It’s a sad state of affairs for one of the country’s most iconic bridges.

"This bridge carries the weight of history on its arches,” explains historian Jonathan Horn. Horn is a former speech writer for President George W. Bush, and author of “The Man Who Would Not Be Washington,” a biography of Robert E. Lee.

The Arlington Memorial Bridge connects the house where Lee lived on the Virginia side to the Lincoln Memorial on the D.C. side, and Horn says it “truly connects us as a country.”

The National Parks Service closed the bridge to tractor trailers and large buses in 2014. (Reuters)

“This is the bridge that symbolically binds north and south together,” he says as he motions over the Potomac River from D.C. to Virginia.

Unfortunately, as Lineman points out, it's a connection that's literally coming apart – as the bridge's interior posts are rusting away.

"The bridge ... is really at the end of, and beyond, its life cycle," according to the National Parks Service, which oversees bridge maintenance.

The Trump Administration has put repairing the bridge on its list of top infrastructure priorities. A full repair is estimated to cost $250 million. (Reuters)

The bridge’s construction was first proposed by congress in 1886 as a memorial to Ulysses S. Grant.  Construction wasn’t completed until 1932 primarily because of southern objections to a Grant Memorial in the Senate and House of Representatives.

It was originally a draw bridge but electrical issues limited its ability to open and close in 1961.

The concrete in the nine arch spans have been deteriorating for decades.

But it’s the center span that’s most critical, according to Lineman.

The bridge is literally coming apart – its interior posts are rusting away. (Reuters)

“The posts at the bottom are corroding,” he says as he looks over the side of the bridge, “and they could eventually crush from the weight of the structure.”

That’s a nightmare scenario that prompted the National Parks Service to close the bridge to tractor trailers in 2014.

The agency also closed the bridge to vehicles during Donald Trump's inauguration – possibly one reason the Trump Administration has put repairing the bridge on its list of top infrastructure priorities.

“They're not only going to get this bascule span replaced,” he said, “but it'll be a total overhaul of the bridge. It will be a complete new bridge deck, the whole way across.”

It’s an investment Horn says is important to connect us to our past and our future.

“This is not just another piece of infrastructure,” Horn says. “This is the bridge that symbolically connects our union, that holds it together, and it needs to be saved.”