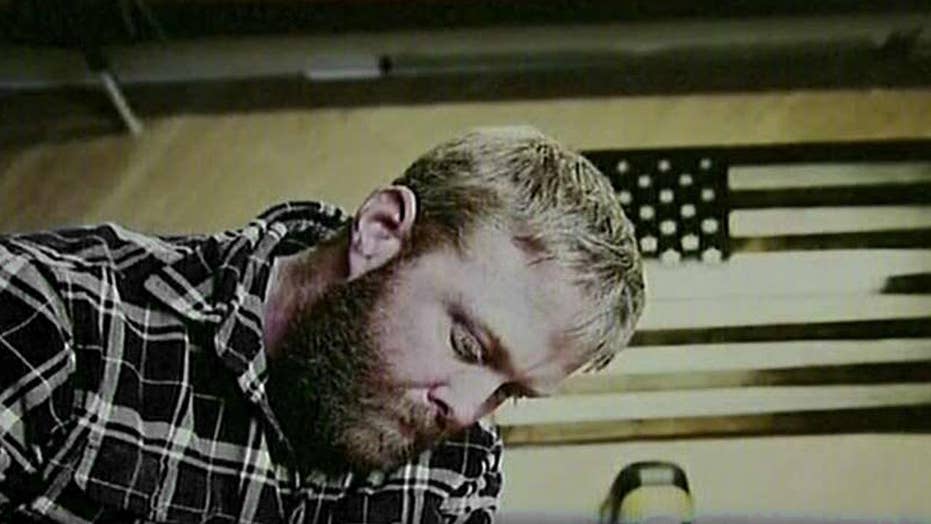 Alicia Acuna has the story

Military veterans can have a tough time re-entering the workforce after serving in war. The special skills honed on the battlefield don't always translate to the civilian world.

Such was the case for retired Air Force pararescueman Josh Vandenbrink. After 14 years of service and 21 deployments to Iraq and Afghanistan, his life back home came with some readjusting.

The Utah man tried multiple jobs in a variety of industries, when one day he, somewhat accidentally, launched his own business. A fellow veteran in the Salt Lake City area who owned a coffee company called Black Rifle Coffee let him set up a work room in the back of his warehouse.

The first thing he did was buy a flag.

"It was super cheesy. It's ah, just one of the plastic ones," Vandenbrink said. "It was like four bucks. And that was about our total budget at the time."

His fellow vets made fun of it, which prompted Vandenbrink on a Friday night to spend five hours making his own. This was no plastic version – it was made from steel.

He used a process he learned while working at a steel shop years before. The result surprised Vandenbrink: A large piece of metal, with rustic but beautiful stars and stripes.

What looks like the colors red, white and blue painted onto the surface is actually, in the most basic of terms, a manipulation of rust.

"I'm sure someone smarter than me could explain it, but there's something about that image, I think it helps it look more blue than it is,” Vandenbrink said. “I think we just know that symbol so well it helps out."

The Black Rifle Coffee owner offered to sell the creation online. That's when Vandenbrink knew he had swung and hit something.

Vandenbrink, suddenly, was in business and orders started coming in. The following week, he had what he describes as a seizure.

"I was in the shop, and I was talking like this and everybody got a weird look on their face," he said.

Five days later he woke up in a hospital, having forgotten much of the episode.

Also wiped from his memory: How to make the flags.

"I just couldn't remember how I made them," he said.

Through trial, and a lot of error, he relearned – if just to fill the orders of the people who had already paid. For the next three months he made more than 50 flags.

"Despite the medical stuff, I felt I had an onus to get it done," he said.

That was more than 18 months ago. Today, his company, Iron Mountain Designs, has an 8,000-square-foot production facility in Salt Lake City, where he has a team, and an expanded business, making custom ironwork and furniture for other businesses. Many of his customers are fellow veterans, like retired Marine Jim Staley, owner of Deliberate Dynamics, a tactical gear and training company.

"We just asked him what the biggest flag he could make is, apparently that's a 10-footer," Staley said. "And that's what we're getting."

Staley is part of the veteran community here that supports each other.

"With Josh, we kinda run in some of the same backgrounds. He's an Air Force guy, I'm a Marine. But a lot of us worked overseas as contractors and stuff like that. We kind of get to know the boys that wear different T-shirts and same mission, you know."

Interestingly, Vandenbrink, whose wife is a former Army pilot, has received requests for such items such as a table in the image of an American flag. A request he refuses.

His feelings on this issue, he said, are personal. And does not judge others for how they express their patriotism.

As for the seizure, sometimes he still experiences them, only with less severity. There was the time at a station when he went to pick up the gas pump handle and realized he forgot how to pump gas.

He says he's had so many traumatic brain injuries from combat, doctors believe that could have been the trigger. Vandenbrink has seen a variety of doctors and has been told the episodes are either from head trauma or from post-traumatic stress disorder. Vandenbrink disagrees with the latter.

Right now, he said he is concentrating on his business and the future.

On each flag, he puts a reminder from the past. A quote by President George Washington is engraved on a wood plaque, hidden on the back. It reads: "I hope I shall possess the firmness and virtue enough to maintain what I consider the most enviable of all titles. The character of an honest man."

Vandenbrink also feels the flag should be a symbol of a 'united' America.

"It'd be cool to come to a point where we can say, ‘hey this represents all of us,’” he said. “Let's have a mature and emotionally respectful conversation."