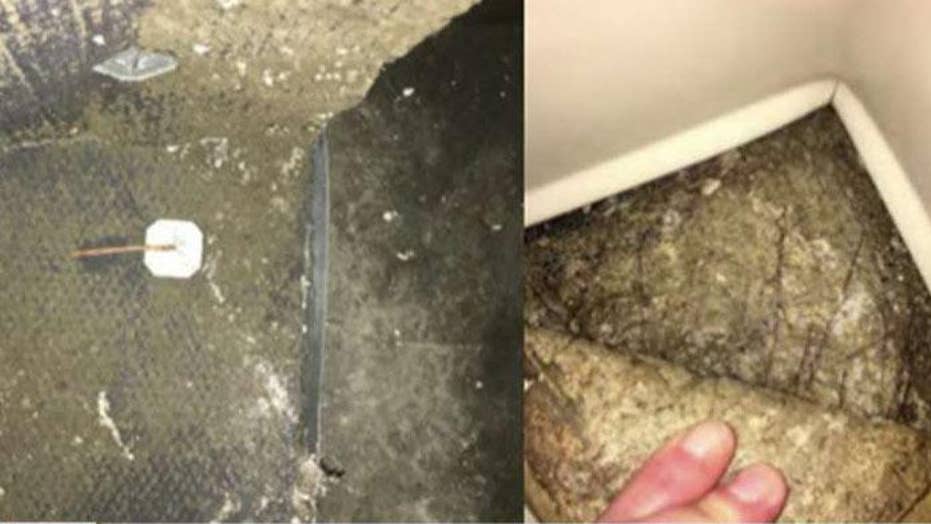 PENTAGON – Military families testified Wednesday about "slum-like" conditions in some privatized base housing that they allege contributes to disease and birth defects.

Crystal Cornwall, a Marine spouse and member of the Safe Military Housing Initiative, appeared before Senate lawmakers to describe her experience with families who live in unsuitable conditions, in homes built by private contractors on military bases.

"I have felt the helplessness of a fellow Marine Corps spouse as she held her new baby and sobbed while we stood under a collapsing moldy ceiling in her home at Camp Lejeune," she said filled with emotion.

"I listened in horror as families at Camp Pendleton told of mice eating through pacifiers and their baby's cribs and electrical outlets catching fire due to wiring issues."

She said her children suffered headaches so severe that she was "concerned they had cancer."

The Military and Family Advisory Network ran an online survey last month that received 16,000 responses from military families across the country, finding that 56 percent of those surveyed found living conditions in base housing was "negative" or "very negative."

Thousands of military families have complained that the poor housing conditions, which some have called "slum-like," have led to disease and even birth defects.

Some families reported rats, toxic mold, vermin and lead in their homes.

REMAINS OF NAVY SAILOR FROM SAN DIEGO, KILLED AT PEARL HARBOR, HAVE BEEN IDENTIFIED, PENTAGON SAYS

Conditions on U.S. military bases were so bad in 1996 that the military privatized 99 percent of base housing. Contractors moved in, which seemed like a good deal for the government -- but some outraged military families argued the contractors have acted like slum lords.

While the Pentagon has insisted there are channels for military families to resolve “tenant issues,” some who testified said the chain of command failed them.

Secretary of the Army Mark T. Esper and Chief of Staff of the Army Gen. Mark A. Milley issued a statement saying they were “deeply troubled” to learn about the conditions of some of the homes.

Air Force dad returns from deployment, surprises his two boys at their school

“We are deeply troubled by the recent reports highlighting the deficient conditions in some of our family housing. It is unacceptable for our families, who sacrifice so much, to have to endure these hardships in their own homes,” the statement read. “We are fully committed to providing a safe and secure environment on all of our installations. We have directed an Inspector General investigation and have taken other actions.”

Fox News reached out to the companies; all responded and vowed to address the issues.

A Corvias spokesperson issued the following statement: "Providing housing for our armed service members is a privilege and Corvias is making changes necessary to mee the 'gold standard' level of service both we and our residents expect."