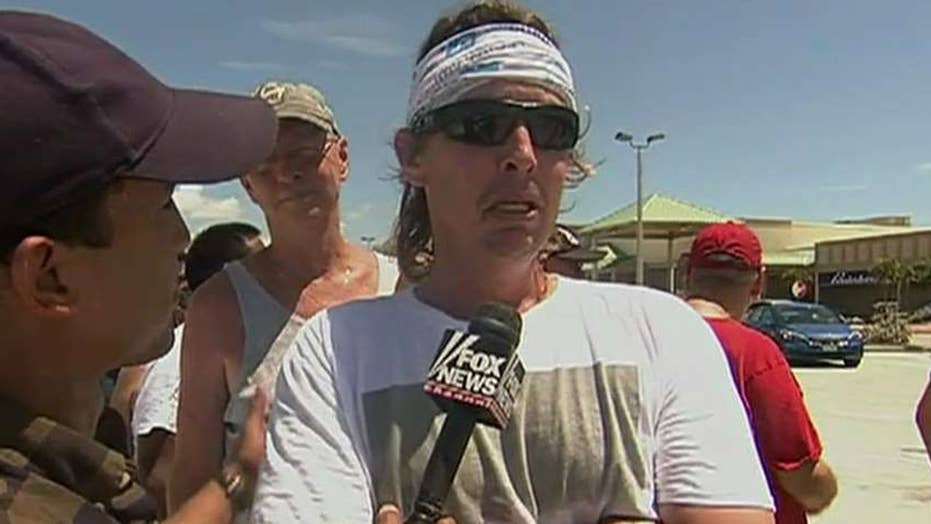 Bryan Llenas rides along with the U.S. Navy during Hurricane Irma relief efforts in Florida

A U.S. military aid helicopter landed at a Key West shopping center on Wednesday, enabling authorities and locals to hand out food and water Wednesday afternoon to Hurricane Irma survivors.

Officials have said they're not sure when residents of the middle and lower Florida Keys will be allowed back. First workers need to scramble to get power back and water running. Officials are aiming to ensure the proper infrastructure is in place first.

Six locations have been set up to distribute food and water to those who stayed behind when thousands evacuated. Monroe County spokeswoman Cammy Clark told WPLG about 2,000 members of the National Guard are in the Keys to help with communications and work at the county distribution points, where supplies will be given out.

Officials said more than 300 power poles are down, and officials are concerned that fires could be started as they try to restore power. Gasoline supplies are still a problem the further one goes toward the lower Keys, where many gas stations are damaged and not working anyway.

“We weren’t mobilized to respond, so myself and a group of veterans and other still-active reserve service members teamed up and decided to come down,” Joe, who is a U.S. Marine from Texas, told WPLG. “We were in Jacksonville. We’ve been doing search-and-rescue all around the Florida area, and then we made our way down to the Keys.”

At least 25 people in Florida have died under Irma-related circumstances, including eight patients at a sweltering nursing home who died after Irma knocked out the air conditioning.

Fox News' Bryan Llenas and The Associated Press contributed to this report.