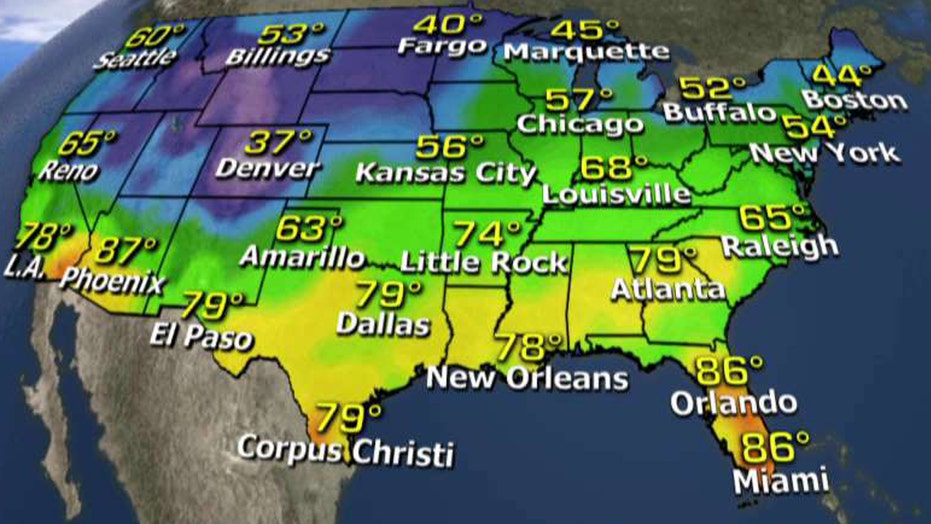 Heavy snow, hail and strong winds moved across the Midwest on Thursday as states farther west began digging out of the spring blizzard that shut down the Denver airport, closed hundreds of miles of roads and left cars stranded along highways on the Plains.

The blizzard buried parts of Iowa, South Dakota, Minnesota and Wisconsin as it crawled east, leaving up to a foot of snow in some areas and prompting officials to issue travel warnings and cancel school. In Michigan, power was knocked out because of snow, ice and wind from the early spring storm.

A car sits buried in snow from the blizzard on 9th Street in Boulder, Colo. on Thursday. (Jeremy Papasso/Daily Camera via AP)

"It's pretty common that we see a couple of big storms in March, certainly not unheard of in this neck of the woods, but it is a high amount," National Weather Service meteorologist Kerry Hanko said.

Several homes were damaged or destroyed and injuries were reported in northwest Arkansas after storms swept through the area around midnight Wednesday. A tornado touched down on the southeast side of Lake Charles in Louisiana, damaging one home, the National Weather Service confirmed Thursday.

In northern Texas, authorities said a hailstorm broke windows in homes and vehicles, while wind gusts reaching 45 mph accompanied snowfall in South Dakota, according to the weather service.

In Minnesota, the Twin Cities' southern suburbs got around a foot of snow and several school districts canceled classes Thursday. Transportation officials in Iowa advised against travel in the northeast portion of the state because roads were covered with snow or blocked by disabled vehicles.

Parts of western Wisconsin saw as much as 13 inches of snow, while the southern third of the state shivered beneath freezing rain. State emergency management officials reported more than 100 crashes on interstates and state highways but no fatalities. Gov. Scott Walker called members of the National Guard to active duty to help local authorities.

Late Thursday, hundreds of homes in western Michigan were without power.

The foul weather was expected to cross through the state's northeastern Lower Peninsula and southeastern Upper Peninsula by midnight, said Mike Boguth, meteorologist with the National Weather Service in Gaylord. Some spots could get up to a foot of snow before the storm's wrath ends, he said.

Meanwhile, the Detroit area got only rain.

Denver International Airport reopened Wednesday evening. But by then, most of the day's flights had already been canceled, leaving people to sleep on the floor there or return home and come back and wait to try to get on another flight during an already busy spring break travel week.

Alicia Bailey was headed back to Atlanta after a business trip in Colorado Springs. She had a treacherous, white-knuckle, four-hour drive to the airport Wednesday only to learn her flight was delayed several times and finally canceled.

"I had a nice little cocktail, and that calmed the nerves down because I was frazzled," she said. "The way I look at it is, it's all God's work. You have to look at the glass half full. I can't change it, so I'm just going to tell my boss, `I'll see you on Friday."'

Earlier, in Colorado and Wyoming, the wind and heavy, wet snow typical for a spring storm weighed down power lines and snapped them into one another, causing outages and flickering lights.

The storm mainly hit the eastern, flat halves of those states before moving farther east. The snow shut down long stretches of Interstates 25, 70 and 80 in Wyoming and Colorado on Wednesday, but they were back open Thursday, except for portions of I-70 in eastern Colorado.

Even politics had to take a snow day in Wyoming, as Democratic presidential candidate Bernie Sanders and former President Bill Clinton canceled campaign events in the state. The weather didn't stop Republican candidate Ted Cruz, who stuck to his plans to appear at two Wisconsin events.