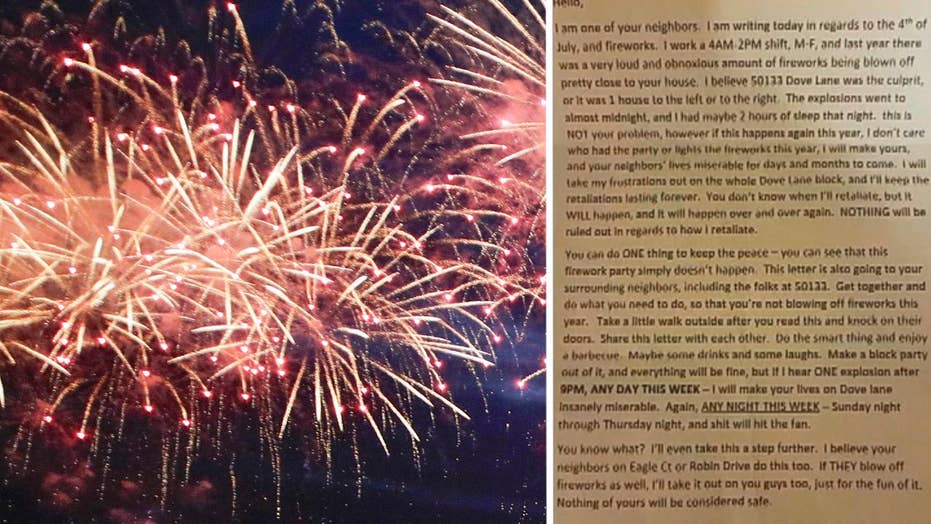 Michigan police investigating threats against entire neighborhood after anonymous letter was sent promising to retaliate if there are any fireworks set off after 9pm.

An anonymous letter threatening retribution for a noisy Fourth of July fireworks display led Michigan police to investigate who penned the menacing missive.

A Chesterfield Township resident, who provided no identification, promised to make neighbors’ “lives miserable for days and months to come” if fireworks were heard after 9 p.m., according to FOX2 Detroit. The author of the letter said they worked a 4 a.m. to 2 p.m. shift and last year got only two hours of sleep due to the pyrotechnics.

“If it happens again this year, I don't care who had the party or lights the fireworks this year, I will make yours, and your neighbors' lives miserable for days and months to come. I will take my frustrations out on the whole Dove Lane block, and I'll keep the retaliations lasting forever. You don't know when I'll retaliate, but it WILL happen, and it will happen over and over again. NOTHING will be ruled out in regard to how I retaliate," the letter reads.

Tony Ivanaj, one of the neighbors who received the letter, told FOX2 Detroit the neighborhood's firework display has been loud, however, “Everything was within guidelines and didn't go past midnight.”

Chesterfield police shared the area’s guidelines for fireworks on Facebook after the letter surfaced, reminding residents that fireworks are allowed only from July 3 to 5, and at anytime other than between midnight and 8 a.m.

The letter concluded that to “keep the peace” the “firework party simply shouldn’t happen” and reiterated if even one explosion was heard after 9 p.m., “nothing of yours will be considered safe.”

As residents of the Eagle's Nest subdivision prepare for the Independence Day celebration, the letter has caused an uneasy feeling.

"The letter was just vague enough to make you feel uncomfortable of all of your things, not just vandalizing your car or your house, but your children, your animals, your pets; it's pretty messed up," Ivanaj told FOX2 Detroit.