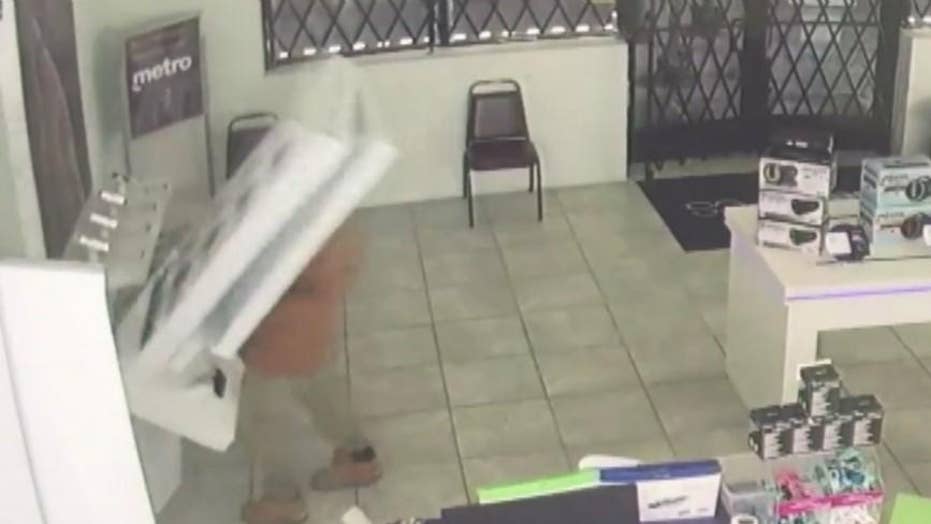 A burglar was shocked when he tried to snatch a cellphone on sale at a Michigan store, but instead toppled the whole display onto him when the security tether did its job.

If he wanted to call 911 for help, he certainly had a phone nearby.

A burglar appeared shocked Thursday night when a display of cellphones came crashing down on top of him as he tried to snatch one of the devices from a Michigan store, video surveillance shows.

The burglar, dressed in a brightly colored orange sweatshirt, entered a Metro PCS store in Westland around 10:40 p.m. and went straight to the displays with the latest cellphone models, police said.

Believing the items to be an easy steal, the man is seen quickly grabbing a phone. He then gets greedy and looks around to see what else he can snatch – not noticing the security tether keeping the phone he thought he'd just stolen secured to the display.

When the phone doesn't immediately give, the man pulls a second and third time, but the tether does not break.

He pulls the cellphone a total of seven times...until the entire display case dislodges from the wall and clatters down on top of him.

The mishap didn't stop the burglar, who got back up and ransacked the rest of the store.

Police said he grabbed multiple boxes of cellphones from behind a counter (they didn't have a tether) before heading towards the exit.

Cops say anyone with information regarding this incident or anyone who can identify the suspect should contact Detective Farrar at 734-467-7912.