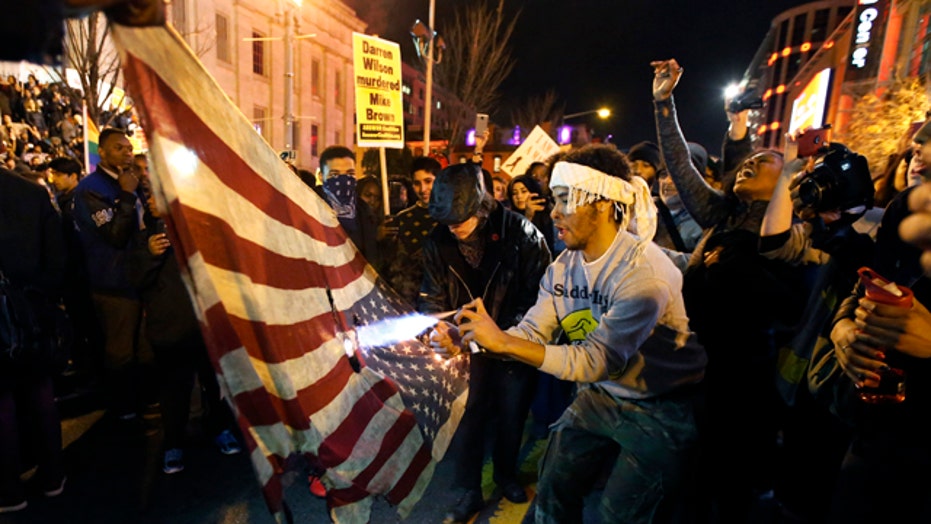 Should Michael Brown’s stepfather be charged for inciting a riot?

ST. LOUIS – Police are investigating Michael Brown's stepfather for angry comments on the streets of Ferguson after a grand jury decided not to indict the police officer who fatally shot his stepson, a spokesman said Tuesday.

Brown, 18, who was black and unarmed, was killed Aug. 9 by Darren Wilson, who is white. Wilson, who resigned from the Ferguson department last weekend, had told the grand jury his life was being threatened, but some witnesses said Brown was trying to surrender.

Video widely circulated after last week's grand jury announcement shows Brown's mother, Lesley McSpadden, on top of a car and breaking down as the decision blares over a stereo. Head, her husband, comforts her then yells angry comments, including "Burn this bitch down!"

Head has not yet been interviewed by police, and there is no timetable for when the investigation will be complete, Schellman said. He declined to discuss what specific charges Head could face. A message left with a spokesman for St. Louis County Prosecutor Bob McCulloch was not immediately returned.

Ferguson police spokesman Jeff Small said that department is not conducting a separate investigation of Head.

Most of the violence occurred in the first two days after the announcement. Peaceful protests have continued, including one Tuesday involving students who walked out of classes from three Ferguson-area high schools.

The Ferguson-Florissant School District said in a letter to students and parents teachers accompanied the students to ensure their safety but that the protests were student-led. The letter also said the district dispatched transportation to pick up students and return them to classes, though some chose to walk back.

It was their first day back in class after Thanksgiving break was extended a day due to bad weather Monday, when similar walkouts were staged across the country.

While daytime protests continue, nighttime demonstrations have waned. There were 124 arrests in Ferguson in the five days following the grand jury announcement, but none since Friday.

As a result, police and the National Guard are scaling back. Schellman said county officers are no longer working 12-hour shifts, though a small contingent will remain posted at night outside Ferguson police headquarters, which has been a focal point for protest gatherings.

Gov. Jay Nixon also announced Tuesday that the National Guard has completed duties in the city of St. Louis and is reducing its presence — which peaked at about 2,200 guard members — in Ferguson and elsewhere in St. Louis County. Still, nearly 1,300 remain in the region. Nixon also said the Missouri State Highway Patrol will continue to work with local police.