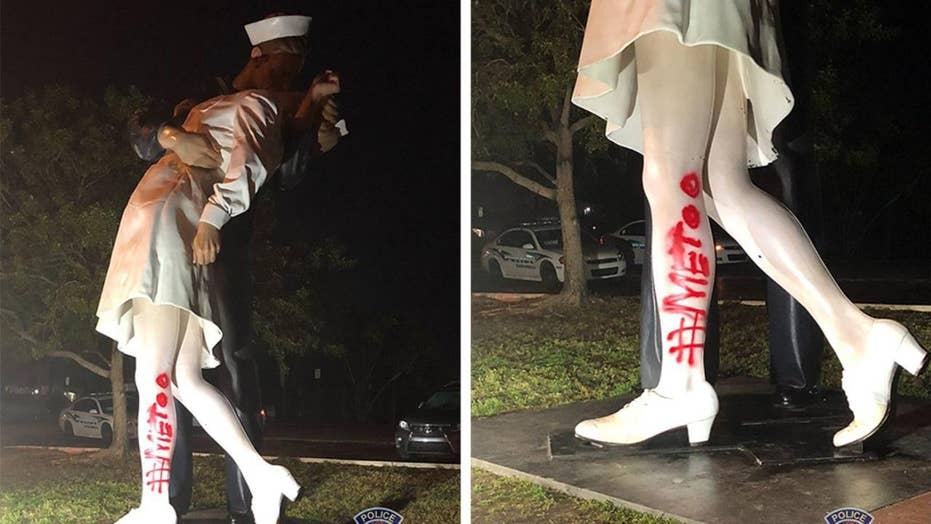 A statue in Florida depicting the iconic photo of a sailor kissing a dental assistant at the end of World War II was tagged with the words '#MeToo.'

A statue in Florida depicting the iconic photo of a sailor kissing a dental assistant at the end of World War II was tagged with the words “#MeToo” on Monday night, Florida police said.

Sarasota police said in a news release that an officer found the phrase painted in red on the left leg of the woman in the “Unconditional Surrender” statue in Sarasota early Tuesday. The paint covered the length of the nurse’s leg.

Someone wrote"#MeToo" in red paint on a Florida statue depicting the iconic photo of a World War II sailor kissing a nurse after the war ended. (Sarasota Police Department)

Police said officers didn’t find any spray paint bottles in the area and no other objects were defaced.

“There was no available surveillance video in the area that captured the incident. There are no known witnesses. It’s believed the incident occurred on Monday, February 18, 2019, between the mid-afternoon and evening hours, however, it is unknown exactly what time,” police said in the release.

Police said the damage to the statue was estimated to be about $1,000. On Tuesday morning, the graffiti was removed.

The graffiti was printed a day after the sailor shown in the iconic New York’s Times Square photo died at the age of 95.

George Mendosa, who was two days short of his 96th birthday, died at an assisted facility in Middletown, Rhode Island on Sunday. He lived at the facility with his wife of 70 years.

The woman in the iconic photo, Greta Zimmer Friedman was a dental assistant on Aug. 14, 1945 – the day Japan surrounded to the United States, ending WWII. The day, known as V-J Day, people spilled into the streets of New York City to celebrate the news.

The ecstatic sailor shown kissing a woman in Times Square celebrating the end of World War II has died. George Mendonsa was 95. It was years after the photo was taken that Mendonsa and Greta Zimmer Friedman, a dental assistant in a nurse's uniform, were confirmed to be the couple. (Victor Jorgensen/U.S. Navy, File))

In a 2005 interview with the Veterans History Project, Friedman said that it wasn't her choice to be kissed.

"The guy just came over and kissed or grabbed," she told the Library of Congress at the time.

"I felt he was very strong, he was just holding me tight, and I'm not sure I -- about the kiss because, you know, it was just somebody really celebrating," she said. "But it wasn't a romantic event. It was just an event of 'thank God the war is over' kind of thing because it was right in front of the sign."

The photo by Alfred Eisenstaedt was first published in Life magazine and is called “V-J Day in Times Square.” It is also known as “The Kiss” and became one of the most famous photographs of the 20th century.