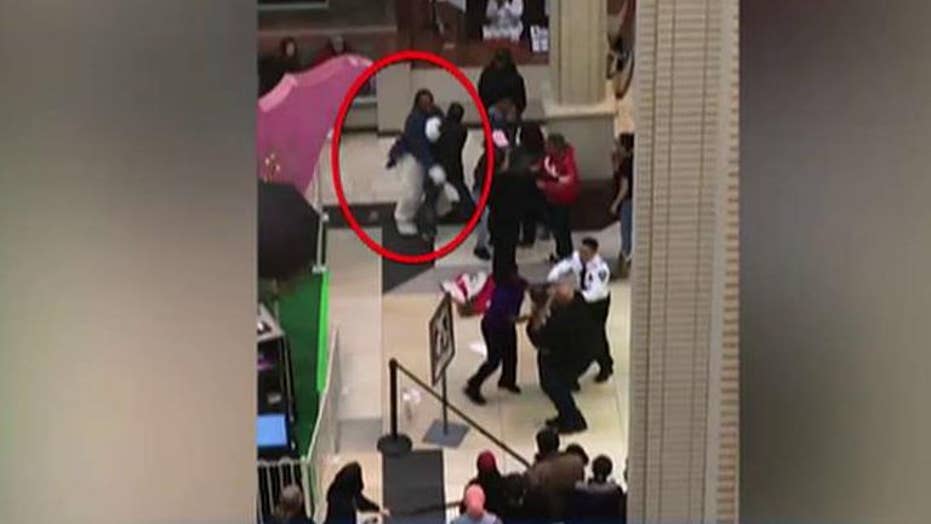 Fists and fur fly in a New Jersey shopping mall

JERSEY CITY, N.J. – A mall Easter bunny and a father who got into a scuffle have made their initial court appearances and had their bails set.

Kassim Charles, who was playing the Easter bunny, and Juan Jimenez-Guerrero, whose toddler daughter fell off a chair while getting her photo taken, are charged with aggravated assault and disorderly conduct.

After Jimenez-Guerrero's 15-month-old daughter slipped from the chair on Sunday, he verbally and physically attacked Charles, authorities said.

A video posted online shows a chaotic scene at the Newport Centre in Jersey City as the men exchange punches. It shows Charles wearing the body portion of the bunny costume fighting and then being separated by security. A few seconds later, Charles appears again, throws off his white bunny gloves and exchanges more punches.

Both men were treated at a hospital for minor injuries.

Charles' girlfriend, Jasmine Butler, told The Jersey Journal that she tried to break up the fight shortly after it started because the child was there but soon noticed the child was gone. Butler said she later learned that a mall patron had grabbed the child to protect her.

Butler said that Charles didn't throw the first punch and that no one would start a fight in a rabbit suit because the headgear is heavy and makes it difficult to see and hear.

"Without that Easter bunny helmet on, he would have been hurt worse," Butler said. "He had bruises on his face."

Jimenez-Guerrero's wife, Nathalie Moreira, told the newspaper that he "took a lot of punches" as he tried to protect their child.

"(Charles) dropped my daughter, and he had no sympathy for her," Moreira said. "My husband was like, `You just gonna drop my daughter?' and (Charles) just started hitting him."

Jimenez-Guerrero has a lengthy criminal history and is wanted on a fugitive from justice warrant, the newspaper reported. Charles has two prior arrests and was wanted on a Jersey City warrant for a light rail violation.