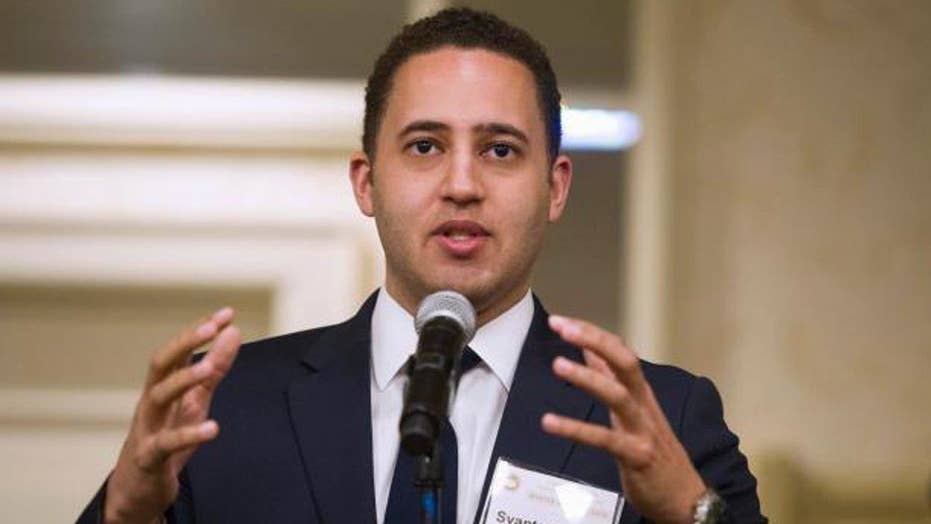 Center would offer addicts place to shoot up under medical supervision

One upstate New York city is planning an unconventional approach to combating a growing heroin epidemic: Letting addicts shoot up on government property under the supervision of medical professionals.

Ithaca Mayor Svante Myrick unveiled his controversial proposal to open a supervised injection facility during an interview with The Associated Press released Monday. The facility would provide a space for users to inject pre-purchased drugs with clean needles under the watchful eye of healthcare professionals who could, in theory, keep them safe and direct them to addiction services.

"My father was a drug addict. He split from the family when I was 5, 6 years old," Myrick told the AP. "I have watched for 20 years this system that just doesn't work. We can't wait anymore for the federal government. We have people shooting up in alleys. In bathroom stalls. And too many of them are dying."

Supporters say the city is taking the necessary steps to treat drug addiction as a public health issue, but opponents say the plan is tantamount to encouraging drug use and the path to approval will be filled with legal challenges.

“The city would have to be sure it’s dotted all the legal i’s and crossed all the legal t’s before it gets into assisting the use of a narcotic,” said William Jacobson, a professor at Cornell Law School in Ithaca who also writes for the Legal Insurrection blog.

"There are multiple levels of legal issues that have to be considered – putting aside the public policy issue of whether in fact this is a good thing.”

The drug addiction debate – particularly as it relates to heroin and opioids – has received increasing visibility in contemporary discourse, and has even worked its way into presidential politics. The heroin epidemic in New Hampshire was a prominent topic during the state’s recent Republican and Democratic primaries.

The conversation is just as passionate in Ithaca, where a standing-room-only crowd gathered at the town’s public library in June for a presentation on heroin use in the community, according to the Ithaca Journal.

“By far and wide, heroin is probably the worst drug on the street that we have here in Ithaca,” police investigator Kevin McKenna said during the meeting.

But while the problem is the same faced by many communities, Myrick’s solution is different.

The 28-year-old Democratic mayor has proposed what would be only the second supervised injection facility in North America. The only current one is in Vancouver.

Ithaca is trying to house the first supervised injection facility in the U.S. This is a similar facility in Vancouver, Insite. (supervisedinjection.vch.ca)

That facility, Insite, has been largely seen as a success in Canada for the past 13 years. More people are seeking treatment, HIV transmission from needle sharing has dropped and fewer people are injecting drugs, according to a report which analyzed 15 years of drug data and was cited by the Vancouver Sun in a 2013 article. Legal challenges to close Insite have been futile and Prime Minister Justin Trudeau has said he wants to see more injection sites.

But while Insite has reportedly flourished in Canada, and around 100 such facilities exist worldwide, proponents who’ve tried to open facilities in New York City and San Francisco have failed.

Kassandra Frederique, the director of the New York policy office for the Drug Policy Alliance, spoke to FoxNews.com while she was en route to Ithaca for a Tuesday community panel about the facility before an official announcement is due Wednesday. DPA has previously advocated for supervised injection facilities for opioid and heroin addiction.

“It’s no longer a fringe issue,” Frederique said. “It’s being talked about at every kitchen table in the country, and people are realizing that what we’ve done in the last 40 years hasn’t been very successful. People around the country are saying they want a new approach. They want something that moves this into a health issue.”

Frederique doesn’t expect the new approach to be an easy sell. She lists finding a place to operate, getting community buy-in and obtaining necessary resources as just some of the tests ahead.

“It’s unfortunate that we have to get to a crisis before we put in the resources,” Frederique said. “When you have a primetime presidential debate about heroin, and drugs, and treatment, and intervention, we realize people want to shift the debate into ‘What can we do different?’ This is affecting everyone from rural communities in Montana to communities in the south Bronx.”

But changing perception could be the least of Myrick’s and Frederique’s worries. Far more pressing is changing the actual laws.

While drugs themselves wouldn’t be sold at an injection facility, they would be openly carried and used there, and staff would assist in the use of them. That immediately puts facilities in the crosshairs of the federal government. Title 21 of the Controlled Substances Act specifically addresses “maintaining drug-involved premises” as being “unlawful.”

Though the federal government has so far shown a general inclination to stay away from enforcing federal drug laws in states where marijuana has been legalized, heroin is an entirely different animal.

“Marijuana is so widely used – it’s considered, in effect, decriminalized in most places – that it’s a totally different situation talking about heroin,” Jacobson said. “It’s a major narcotic.”

DPA notes that no one has died from an overdose at the Vancouver facility; however, the possibility of death or serious injury exists and could open up facilities to lawsuits or criminal charges.

Heroin Overdoses 2002 to 2014 in the United States | HealthGrove

“I think it opens up potential liability,” Jacobson said. “I would think the city would also want to check with its insurers to make sure if there’s a claim raised if someone is injured or overdoses the city is not liable. There are multiple levels of legal issues that have to be considered – putting aside the public policy issue of whether, in fact, this is a good thing.”

Inquiries to the New York State Department of Health and Myrick’s office by FoxNews.com were not immediately answered.