MAYFIELD, Ky. – Emergency tones poured into the Mayfield Fire Department after a tornado swept through the region, but first responders were at first helpless. The steel roll-up doors had caved in, trapping emergency vehicles inside.

Using a tow strap, the Mayfield firemen "hooked it to these roll-up doors and we had to rip them off the building so we could respond and start helping people," Mayfield Fire Chief and EMS Director Jeremy Creason told Fox News.

Even still, wreckage blocked the roadways, forcing emergency workers to respond on foot until paths were cleared.

Tornadoes tore through multiple states on Dec. 10, killing around 90 people. Kentucky Gov. Andy Beshear said 77 people died in Kentucky, the state hit hardest, and as of last week, more than 900 storm victims were being housed at state parks, resorts and hotels.

First responders and volunteers from across the region came to aid the devastated town, often facing obstacles of their own. 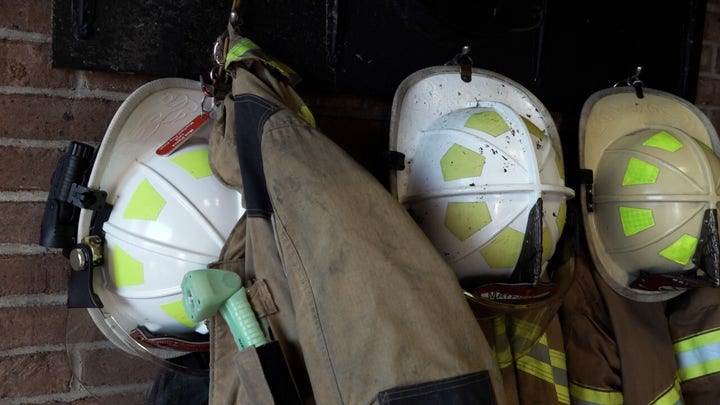 "We responded to every portion of the path of the tornado," Creason told Fox News. The tornado directly hit his fire station.

Soon after the tornadoes struck, "a lot of walking wounded" started arriving at the fire station, Creason said. The department set up a triage station and began giving care.

A Mayfield ambulance destroyed by a tornado (Fox News Digital)

"People were coming to us, telling us people were trapped," the fire chief told Fox News.

Following the tornadoes, Mundy and others helped pull people from out under the rubble.

"Everybody has lost something and I want to do whatever I can to help," Mundy told Fox News. While he felt there was a lot he wouldn't be able to do for the community, Mundy said he was determined to "get out and work and try to make the best of the situation."

The community has been grateful for law enforcement's help, Mundy told Fox News.

"I helped a lady today … she actually hugged me and was thanking me for everything I've done for her," he said. "A lot of the people are really thankful — I think the hug brightened my day, that's all I really needed."

Similarly, Nate Flint, with the U.S. Army, and Ben Wofford, a paramedic from a neighboring county, told Fox News they were happy to lend a hand to the Mayfield community.

"It feels great being able to get out here and actually do something," Flint said. He flew in after the tornado and was handing out water to community members, asking if they had everything they needed.

The National Guard, the American Red Cross and community volunteers were among the countless others who responded to the tornado's aftermath.