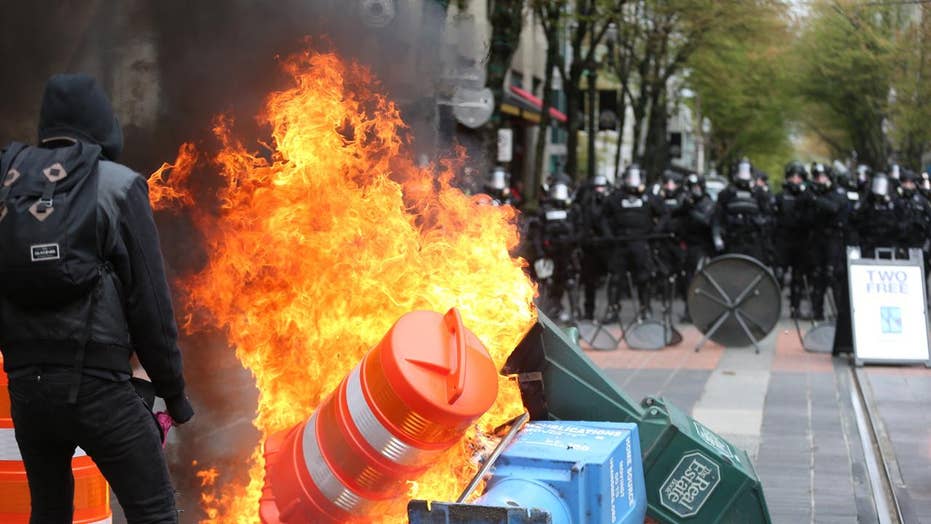 Anarchists clash with police during May Day protests

More than 40 arrests were made Monday as tens of thousands across the country chanted, picketed and protested against President Trump’s immigration and labor policies on May Day.

Police in Portland, Ore., shut down a protest that they said had become a riot after marchers began throwing smoke bombs and other items at officers. Police made 25 arrests, including a 14-year-old who was charged with rioting.

Authorities said the group of Portland anarchists were wearing black bandanas and ski masks and began breaking windows at businesses, setting fires on downtown streets and damaging a police cruiser.

Five people in Seattle were arrested, one for hurling a rock as pro- and anti-Trump demonstrators faced off.

Police in Olympia, Wash. ordered protesters to disperse, calling them “members of a mob” as some threw bottles, used pepper spray and fired marbles from slingshots at officers. Objects struck nine officers and nine people were arrested, according to Olympia police Chief Ronnie Roberts.

In Oakland, California, at least four were arrested after creating a human chain to block a county building where demonstrators demanded that county law enforcement refuse to collaborate with federal immigration agents.

Despite the West Coast clashes, most nationwide protests were peaceful as immigrants, union members and their allies staged a series of strikes, boycotts and marches to highlight the contributions of immigrants in the U.S.

In cities large and small, the protests intensified throughout the day.

Teachers working without contracts opened the day by picketing outside schools in Philadelphia and Pittsburgh. Activists in Phoenix petitioned state legislators to support immigrant families.

Thousands of union members and activists marched in the shadow of some of the biggest resorts on the Las Vegas Strip, including a hotel that bears the president's name.

While union members traditionally march on May 1 for workers' rights around the world, the day has become a rallying point for immigrants in the U.S. since massive demonstrations were held on the date in 2006 against a proposed immigration enforcement bill.

In recent years, immigrant rights protests shrank as groups diverged and shifted their focus on voter registration and lobbying. Larger crowds returned this year, prompted by Trump's ascension to the presidency.

The White House did not respond to requests for a response to the May Day demonstrations.