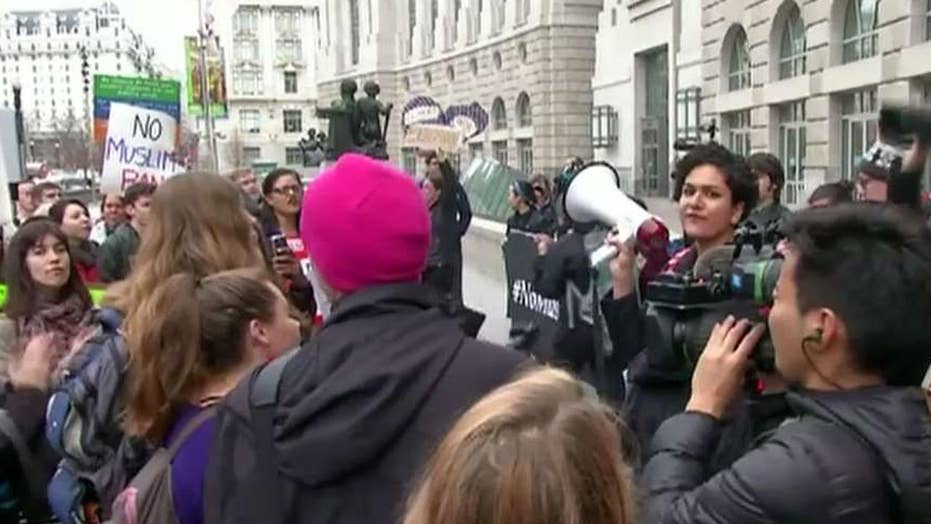 May Day protesters vow to send message to President Trump

Thousands of immigrants and union members across the United States banded together on Monday under a rallying cry against President Donald Trump's immigration policies.

The White House proclaimed May 1 as "Loyalty Day," a time to "recognize and reaffirm our allegiance to the principles" upon which America was build and express pride in those ideals.

“The United States stands as the world's leader in upholding the ideals of freedom, equality, and justice. Together, and with these fundamental concepts enshrined in our Constitution, our nation perseveres in the face of those who would seek to harm it," according to the proclamation released on Friday.

TRUMP PROCLAIMS MAY 1 AS 'LOYALTY DAY'

The day, however, still focused on immigrants in the U.S. Immigrant groups joined Muslim organizations, women's advocates and others on Monday to speak out against the orders and show the value of immigrants in American communities. The protests centered on Trump's executive orders for a wall along the U.S.-Mexico border and a ban on travelers from six predominantly Muslim countries.

"We have never seen such an outpouring of support since we have since the election of Donald Trump," said Kica Matos, a spokeswoman for the Fair Immigration Reform Movement.

Trump called on Americans to observe the day with ceremonies in schools and other public places, but rallies in major cities, including New York, Chicago, Seattle and Los Angeles, ran into the late evening.

Demonstrations were held in dozens of cities, from Miami to Seattle.

In Washington, D.C., commercial construction company owner Salvador Zelaya paid his employees to take the day off and attend a march. The Salvadorian business leader said his 18 workers were spending the morning making banners to take to a rally that will end in front of the White House.

"All of us, we are immigrants. We came to this country. We work hard," Zalaya said. "We build up our own business. We employ people. We pay taxes and we make America great."

In Philadelphia, about 1,000 school teachers picketed at schools around the city. Parents joined the teachers, many of whom took sick days to protest. Schools were open and the district said it was working with principals and substitute teachers to make sure classes would not be disrupted.

Immigrant rights activists in communities in Indiana, Massachusetts, Texas and elsewhere are calling for strikes to show Americans the demand for immigrant labor and immigrants' purchasing power.

Immigrant advocates said they hope their message will reach Trump, congressional lawmakers and the public, as well as provide a sense of unity and strength to those opposed to the administration's policies. Despite Trump's avowed crackdown on illegal immigration, many said, they hoped a show of strength would help persuade politicians to rethink their plans.

"Every pivot back to the issue of immigration gives the immigrant rights movement another opportunity to make its best pitch to the public," he said.

Rallies, protests and marches, from the Philippines to France, were not as peaceful. Police in Paris deployed tear gas on hundreds of hooded protesters who threw Molotov cocktails and objects at the officers.