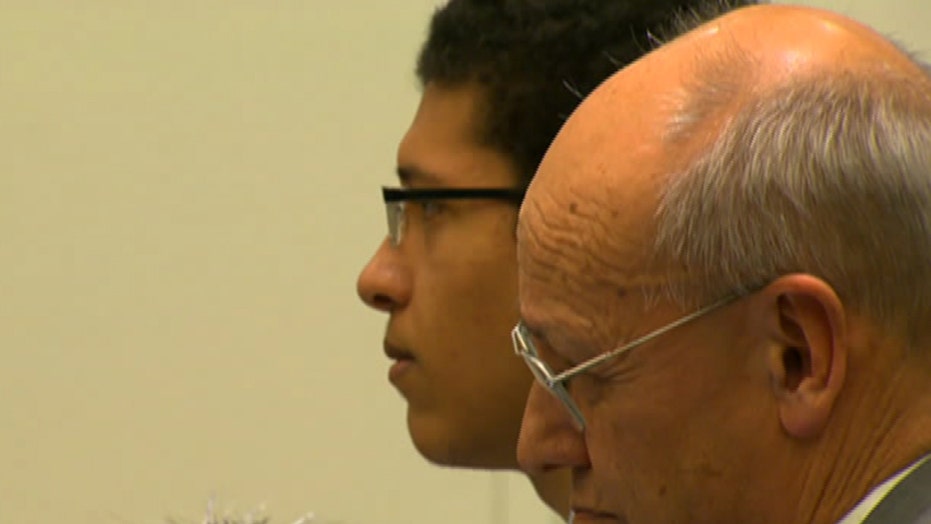 SALEM, Mass. – A Massachusetts teenager was convicted Tuesday of raping and killing his high school math teacher when he was 14.

Philip Chism followed his 9th grade algebra teacher, Colleen Ritzer, into a school bathroom, strangled her, stabbed her at least 16 times and raped her.

Chism, now 16, was convicted of a raping Ritzer inside the bathroom but was acquitted of a second rape, committed with a tree branch in woods near the school where Chism put her body. He was also convicted of armed robbery for stealing Ritzer's credit cards and her underwear.

Chism stared straight ahead and did not have any visible reaction as the verdicts were read in Salem Superior Court. His mother declined to talk to reporters as she left the courthouse.

Standing later with the district attorney that prosecuted the case, Ritzer's parents said the verdicts mark a new phase in their lives in which they hope to honor their 24-year-old daughter's legacy.

"This guilty verdict, while the beginning of justice for Colleen, is certainly no cause for celebration as there can never be true justice for the crime committed," said Thomas Ritzer, her father. "There remains a tremendous absence in our lives, one that sadly can never be replaced."

The family, he added, will still be reminded of the crimes as Chism appeals the case and is eligible for parole at some point. "We will carry on and do our very best to find the good in every day," said Peggie Ritzer, the victim's mother.

During the trial, his lawyer admitted Chism killed Ritzer, but said he was suffering from severe mental illness and was not criminally responsible for his actions. A psychiatrist who testified for the defense said Chism was hearing voices and in the throes of a psychotic episode when he killed Ritzer.

On Oct. 22, 2013, Ritzer asked Chism to stay after school. Another student who also stayed late that day testified that Ritzer tried to engage Chism — a student who had recently moved to Massachusetts — in talk about how his new community compared with his old town of Clarksville, Tennessee. The student said Chism became visibly upset and Ritzer eventually changed the subject.

A short time later, Ritzer left the classroom. Jurors were shown chilling surveillance video that showed Ritzer walking down the hallway to the bathroom. Seconds later, Chism is seen poking his head out of her classroom and looking down the hall.

He then goes back into the classroom, but comes right back out with his hood on. Chism is then shown putting on a pair of gloves as he walks into the bathroom. Minutes later, he is shown emerging from the bathroom carrying the black pants Ritzer was wearing.

A bloody box cutter, mask, gloves and a hooded sweatshirt were later found in his backpack by police who found Chism walking beside a highway in neighboring Topsfield.

Chism's lawyers had said he should be acquitted of the rape in the woods, arguing Ritzer was already dead by then. Prosecutors, however, had said Chism did not deliver the fatal stab wounds to her neck until he brought her outside.