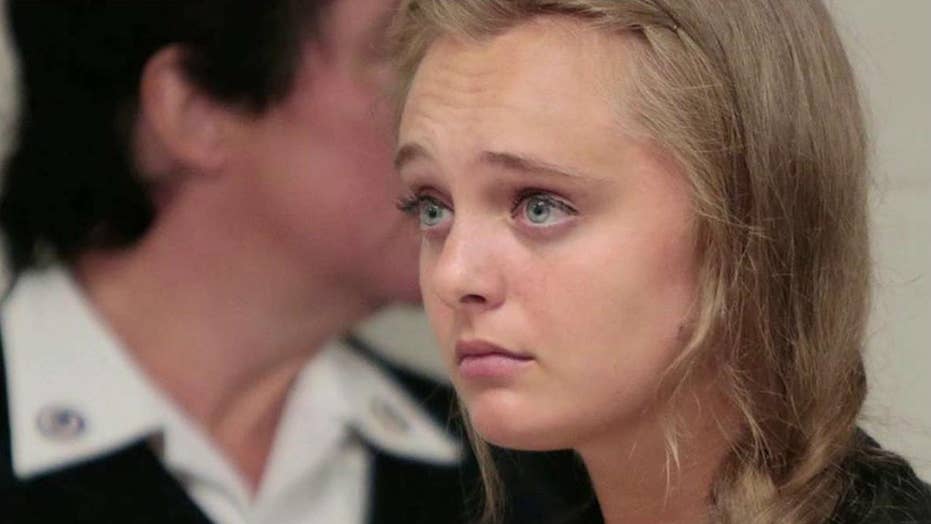 Prosecutors have charged a Massachusetts teen with involuntary manslaughter after text messages to her boyfriend appeared to show her urging him to commit suicide.

Conrad Roy III parked his truck outside a Fairhaven Kmart last year and killed himself by carbon monoxide poisoning. Prosecutors say Michelle Carter, his girlfriend at the time, assisted him by urging him to overcome his doubts about taking his own life, pressuring him to do it and even telling him to get back in his truck after becoming frightened that the plan was working.

"You can't think about it. You just have to do it. You said you were gonna do it. Like I don't get why you aren't," Carter allegedly wrote to Roy on the day he died. Carter’s lawyer has denied that she pushed him to kill himself and has asked the judge to dismiss the case.

In their written response, prosecutors included text exchanges between Carter and Roy that they say support their claim that Carter caused her boyfriend's death by "wantonly and recklessly" helping him poison himself.

Roy, 18, had a history of depression and had previously attempted suicide two years earlier, taking an overdose of the painkiller acetaminophen.

"You can't keep living this way. You just need to do it like you did the last time and not think about it and just do it, babe," Carter texted him.

Joseph Cataldo, Carter’s lawyer, said her texts amount to speech protected by the First Amendment. He said it’s clear from the exchanges that Roy had made up his mind to take his own life and Carter, now 18, didn’t cause his death.

"He had thought this out. He wanted to take his own life. It's sad, but it's not manslaughter."

Roy spent most of his time in a psychiatric hospital following his earlier suicide attempt. In the weeks prior to his death, he was gearing up to graduate from high school and receive his sea captain’s license, said his aunt, Becki Maki.

"He did not have the signs of someone who was considering that," Maki said.

Carter and Roy had met two years earlier while both were visiting relatives in Florida. They kept in touch through text message and email upon returning to Massachusetts. The two lived about 50 miles apart and hadn’t seen each other for about a year before Roy died.

Roy used a gasoline-operated water pump to poison himself with carbon monoxide.

While discussing the plan, Carter appears to taunt Roy. "But I bet you're gonna be like 'oh, it didn't work because I didn't tape the tube right or something like that," she wrote. "I bet you're gonna say an excuse like that ... you seem to always have an excuse."

Cataldo said Carter had tried to repeatedly talk Roy out of killing himself and only decided to support his plan after it became clear Roy wasn’t going back. After about a month before his suicide, she suggested that he seek treatment at a psychiatric hospital where she was receiving treatment for an undisclosed condition. Roy refused and later suggested that they both kill themselves, like Romeo and Juliet, Cataldo said.

In a text exchange on July 7, 2014, six days before he was found dead, Carter advised Roy to seek help.

"Well it's too late I already gave up," Roy responded.

Some legal experts say it may have been a reach for prosecutors to charge Carter with manslaughter. Massachusetts does not have a law against assisted suicide.

"Causation is going to be a vital part of this case," said Daniel Medwed, a Northeastern University law professor. "Can the prosecution prove that she caused him to kill himself in this way? Would he have done it anyway?"

Prosecutors point to a text Carter sent to a friend after Roy's death.

"...his death is my fault like honestly I could have stopped him I was on the phone with him and he got out of the car because it was working and he got scared and I (expletive) told him to get back in ... because I knew he would do it all over again the next day and I couldn't have him live the way he was living anymore I couldn't do it I wouldn't let him," Carter wrote.

Roy's grandfather, also named Conrad, said his grandson seemed happy in the days before he died.

"He was coming out of his depression," Roy said. "We saw the light at the end of the tunnel, and she just blew that tunnel up. She shut the light off."