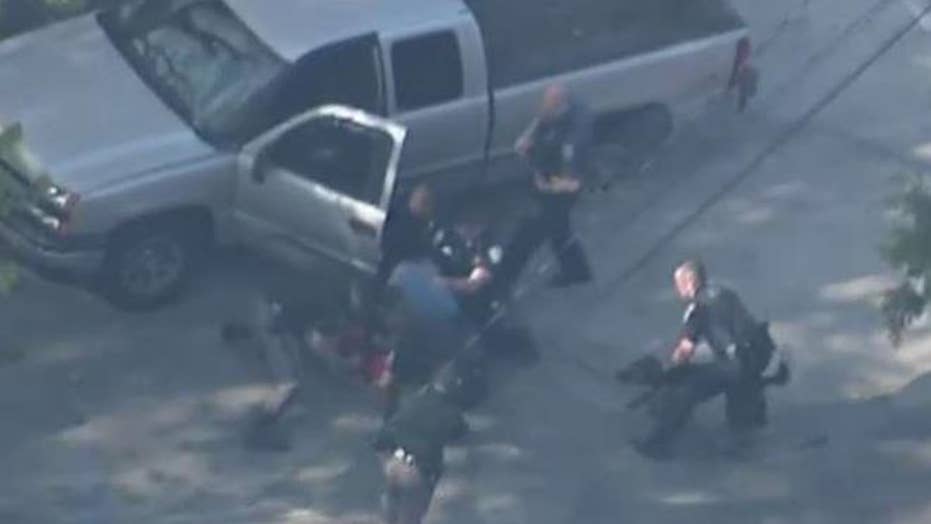 Governors from two states on Thursday called for a full investigation into police use of force against a suspect who was shown on videotape being beaten by officers after apparently surrendering following a long high-speed chase.

Massachusetts Gov. Charlie Baker and New Hampshire Gov. Maggie Hassan expressed concern over the way police rushed Richard Simone Jr. after he stepped slowly from his pickup truck, knelt and put his hands on the ground after a lengthy pursuit that started in Holden, Massachusetts and ended 50 miles away in Nashua, New Hampshire.

"I thought the video was incredibly disturbing and I'm anxious to work with the folks in New Hampshire to get moving on the investigation and to figure out what's what as quickly as possible and take the appropriate action," Baker said.

"The footage from yesterday raises serious concerns, and I have been in contact with the Attorney General and the Commissioner of Safety," Hassan said in statement. "All New Hampshire public safety officials are held to the highest standards, and it is important and appropriate that the Attorney General's office has opened an investigation into the incident."

In court Thursday, Simone agreed to be taken back to Massachusetts to face outstanding warrants there on assault with a deadly weapon and larceny.

The focus, however, centered on the officers' actions following the chase that reached speeds of more than 100 mph.

Jeffery A. Strelzin, a senior assistant attorney general in New Hampshire, said in an email that "our office will be conducting a criminal investigation to determine what force was used, by whom, and whether it was appropriate under the law."

Simone was arraigned on a fugitive-from-justice charge in Nashua District Court and was expected to be turned over to Massachusetts authorities. It wasn't clear when that would happen.

He was shackled at the waist and ankles. He was wearing a Boston Red Sox T-shirt and shorts. His public defender made a reference to Simone's "medical condition" and got approval for him to sit in court. The judge said it was his understanding Simone would be seeking medical treatment, and the lawyer agreed. While not showing any visible bruises, Simone's mug shot showed him with blood on his left ear.

Simone was taken into custody in New Hampshire, but Massachusetts State Police were also involved in the pursuit and plan to review the apprehension of the suspect, "to determine whether the level of force deployed during the arrest was appropriate," state police spokesman David Procopio said.

The chase began when Simone refused to stop for police in Holden. He was wanted on multiple warrants for assault and battery with a dangerous weapon, larceny and failure to stop for police, Procopio said in a statement.

"We saw about 15 out-of-state cops, state police and some from Holden, Massachusetts, chasing a pickup," witness Monty Hays told WMUR-TV.

The chase went through several towns at speeds exceeding 100 mph, with the pickup truck "making abrupt lane changes as the (suspect) continued to try to evade capture" and crashing at least once, Procopio said.

Spike strips laid out by police eventually took their toll. In Nashua, where the chase ended in a residential neighborhood, witnesses said the truck was moving slowly.

"Its tires they just were exploded," Hays told the television station. "They were on rims. Rubber was flying everywhere."

The pursuit lasted about an hour.

Helicopter video showed the pickup truck stopped next to a utility pole on a dead-end street before police officers surrounded it with their weapons drawn. The driver stepped from the truck, got onto the ground and was on all fours and lowering himself when the officers moved in.