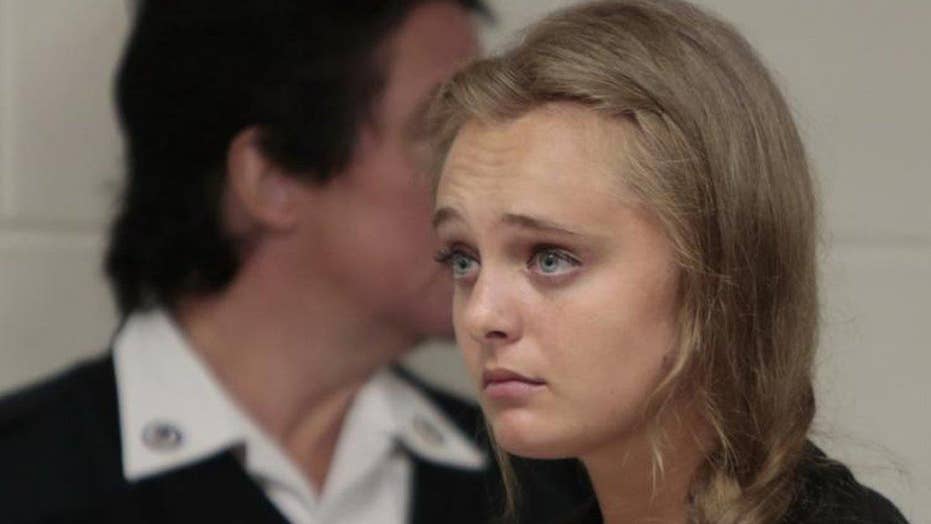 As the involuntary manslaughter trial of Michelle Carter gets underway, prosecutors allege she badgered and berated her depressed boyfriend into killing himself through a relentless barrage of text messages and final phone calls that sealed his fate.

But defense lawyers argue the Massachusetts woman was struggling with her own mental health issues as a troubled 17-year-old under the influence of anti-depressants and that her messages, regardless of content, were protected free speech.

The body of 18-year-old Conrad Roy III was discovered in his pickup truck on July of 2014. He had died as a result of carbon monoxide poisoning, parked in a K-Mart lot.

Prosecutors say the investigation that followed showed Carter encouraged Roy's research into how to commit suicide, mocked him when he delayed his death, instructed him to follow through, promised to console his family and then played the grieving girlfriend in the days that followed.

Assistant District Attorney Maryclare Flynn highlighted a multitude of disturbing texts sent between the teenagers, including one from Carter on the day of Roy's suicide that read: "You can't think about it. You just have to do it."

Flynn charged that as Roy's truck was filling with carbon monoxide and he fled the vehicle, filled with fear, Carter told him, during a phone call "to get back in."

Prosecutors say she listened as he cried and took his last breath.

Carter's defense attorney, Joseph Cataldo, argued that Roy's death was a suicide, tragic and sad. But, he argued, it was not a homicide.

Cataldo argued that she was "involuntarily intoxicated" via the use of antidepressants leading up to Roy's suicide. She had sought treatment at McLean Hospital, one of the area's top facilities for psychiatric care, and in the month prior to Roy's death urged him to do the same. Cataldo pointed to a troubled family life and noted Roy's own history of depression, saying he had attempted suicide several times.

He noted that the two teens had seen each other in person only a handful of times after first meeting during a Florida vacation in 2012. Their relationship prospered over text message and through phone calls. At the time of his death, Cataldo said Roy had not met-up with Carter in more than year.

The defense argues that Carter's words were free speech and that she is not responsible for another troubled teenager's decision to take his own life.

Roy's mother was the first witness called by the prosecution. Lynn Roy acknowledged that her son had previously attempted suicide and had long suffered from anxiety. He had been hospitalized several times for treatment. She recalled their final day together, including a long walk down a local beach, chatting and joking. Later that evening he drove off in his truck.

Earlier this week, Carter waived her right to a jury trial and chose instead to have Judge Lawrence Moniz hear the case.  She is facing up to 20 years in prison.