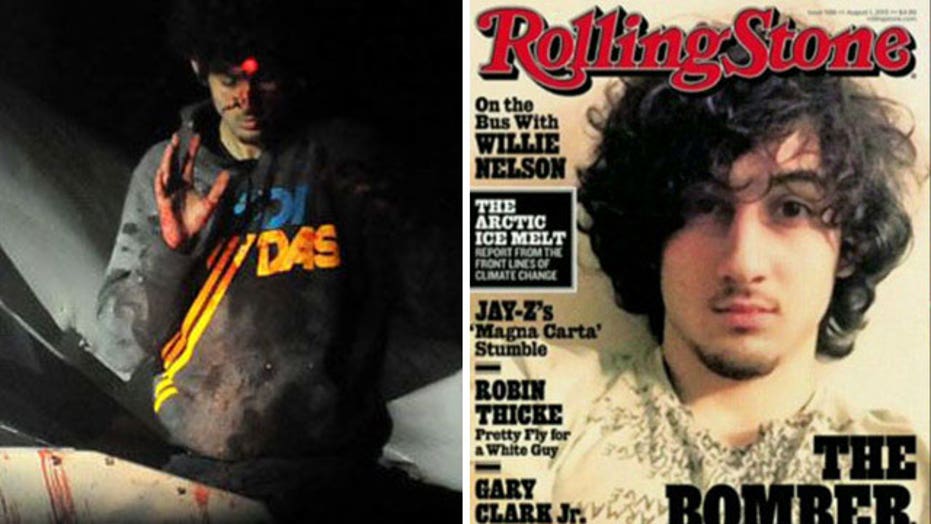 Probe under way into release of graphic Tsarnaev images

A Massachusetts State Police photographer who released stark photos to a local magazine of the capture of Boston bombing suspect Dzhokhar Tsarnaev faces a hearing to determine if he will be suspended until an internal investigation is complete.

Massachusetts State Police spokesman David Procopio says the agency didn't authorize Sgt. Sean Murphy to release photos of Tsarnaev to Boston Magazine. He says Murphy has been relieved of duty for one day after he released the photos in response to a controversial image on the cover of Rolling Stone magazine.

Procopio did not say when the hearing will be.

Murphy said in a statement to Boston Magazine that Tsarnaev is evil and that his photos show the "real Boston bomber, not someone fluffed and buffed for the cover of Rolling Stone magazine."

Murphy has not returned calls from The Associated Press. No one answered the door Friday at the blue cottage along the coast in Biddeford, Maine, where neighbors said he spends weekends.

Murphy said in his statement to Boston Magazine that Rolling Stone's cover photo, a softly-lit image of a brooding Tsarnaev, insults officers killed in the line of duty, their colleagues and their families by glamorizing the "face of terror."

"It also could be an incentive to those who may be unstable to do something to get their face on the cover of Rolling Stone magazine," he said.

Rolling Stone said the cover story on Tsarnaev was part of its "long-standing commitment to serious and thoughtful coverage of the most important political and cultural issues of our day."

Boston Magazine printed more than a dozen photos from the day Tsarnaev was captured, including images of police during the manhunt and Tsarnaev as he was captured and taken away by ambulance.

Three images showed Tsarnaev as he emerged from the boat, head bowed, with red smudges and streaks on his clothing and the boat.

Two images showed the red dot of the laser sight in the middle of his forehead and just above his left eye. The other showed the dot on the top of his head as he buries his face in his arms.

In his statement, Murphy said the capture played out like a television show, but he hopes his photos show it was "as real as it gets."

“As a professional law-enforcement officer of 25 years, I believe that the image that was portrayed by Rolling Stone magazine was an insult to any person who has every worn a uniform of any color or any police organization or military branch, and the family members who have ever lost a loved one serving in the line of duty," the statement read.

"The truth is that glamorizing the face of terror is not just insulting to the family members of those killed in the line of duty, it also could be an incentive to those who may be unstable to do something to get their face on the cover of Rolling Stone magazine," Murphy said.

“I hope that the people who see these images will know that this was real. It was as real as it gets. This may have played out as a television show, but this was not a television show. Officer Dick Donohue almost gave his life. Officer Sean Collier did give his life. These were real people, with real lives, with real families. And to have this cover dropped into Boston was hurtful to their memories and their families. I know from first-hand conversations that this Rolling Stone cover has kept many of them up—again. It’s irritated the wounds that will never heal—again. There is nothing glamorous in bringing more pain to a grieving family," Murphy told Boston Magazine.

Gov. Deval Patrick appeared reticent on the issue Friday as he walked quickly back to his office after an event in the Statehouse.

"Talk to the state police, they violated the rules when they did it," he said in response to a question from a reporter.

Asked if he was concerned the release of the photos would compromise the investigation of Tsarnaev, Patrick again referred questions to the state police.

An aide to the governor later said Patrick was only referring to the individual officer who released the photos, not any other members of the state police.

The U.S. Attorney's Office issued a statement to MyFoxBoston.com, which reads, "The release of these photos was completely unacceptable. We have spoken with the Massachusetts State Police, who have assured us that the release of the photos was unauthorized and that they are taking action internally in response."