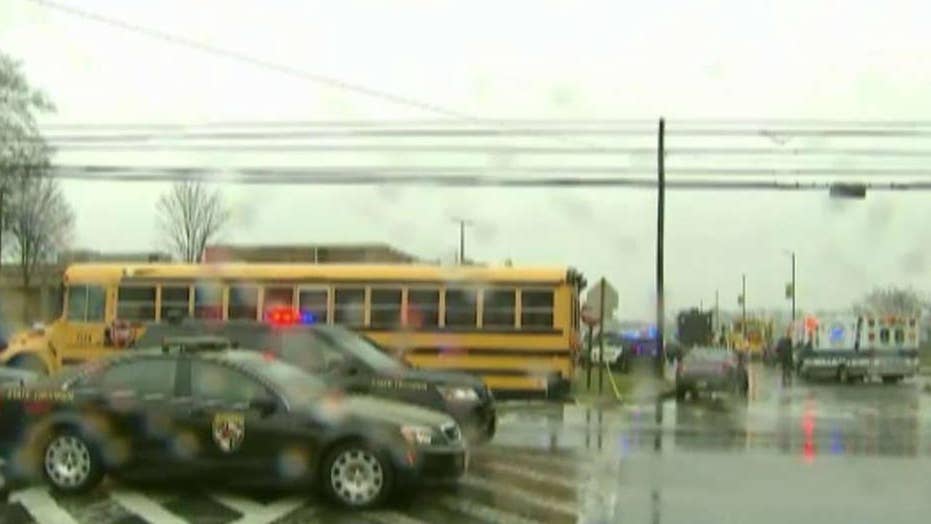 The heroic actions of the deputy who stopped a school shooter Tuesday sends a message that would-be attackers will be "met with force," a school policing advocate said.

The push for more officers in schools comes after Blaine Gaskill, a St. Mary's County Sheriff's Office deputy at Great Mills High School, engaged 17-year-old gunman Austin Wyatt Rollins within 60 seconds of the first shot being fired. Wyatt ended up being the only fatality.

“It should send a clear message to any would-be attacker that if you are going to bring that level of violence to one of our schools, where there is a proper trained [School Resource Officer] in place, be prepared to be met with force,” Mo Canady, executive director of the National Association of School Resource Officers, told Fox News on Wednesday.

He added: “We would like to see guns in schools in the hands of the right person. We’re calling for an SRO -- at least one -- in every school in the country.”

Police said the attack Tuesday – which left the gunman dead and injured two others, including a female student who was in critical condition -- ended after Gaskill fired a round from his weapon.

But as of Wednesday, it was still unclear whether Gaskill took out Rollins, or if Rollins killed himself as Gaskill closed in. The St. Mary’s County Sheriff’s Office declined to give Fox News specifics of the engagement, saying that it is an “ongoing investigation.”

This photo of gunman Austin Wyatt Rollins, 17, was posted to his Facebook in May 2014.

If confirmed, however, it appears to be the first time in more than a decade a school resource officer ended a shooting situation by personally subduing the attacker.

Canady said the only other instance he recalls in recent memory was in March 2001, when Rich Agundez Jr., an officer assigned to Granite Hills High School outside of San Diego, fired five shots and struck a gunman in the jaw and buttocks. Jason Hoffman, the 18-year-old senior thwarted in that attack, which left five wounded, ended up hanging himself in his jail cell seven months later and Agundez Jr. went on to receive the Public Safety Officer Medal of Valor, according to reports.

The Washington Post, citing a year-long analysis of dozens of school shootings dating back to 1999’s Columbine massacre, also reported that they found only one case of a school resource officer subduing a shooter.

“This is a situation yesterday where it’s pretty clear the SRO did exactly what he was supposed to do,” Canady told Fox News.

A shooting at Great Mills High School in Maryland was stopped Tuesday, police said, after a school resource officer engaged the gunman. (GMHS)

His organization, a nonprofit which describes itself on its website as being "dedicated to making schools and children safer by providing the highest quality training to school-based law enforcement officers," estimates that there are between 14,000 to 20,000 school resource officers in U.S. schools today.

The exact number is unknown since they aren’t required to register with any databases, it adds, but it made the estimation based on Justice Department data and officers they have trained. The organization also estimated, citing the latest U.S. Department of Education data available, that as of the 2013-2014 school year approximately 29,550 American public schools out of around 98,500 had at least one school resource officer.

The debate on arming people inside schools has been reignited in the wake of Tuesday’s incident. It first was thrust into the national spotlight following last month’s Florida high school shooting, with President Trump calling for “adept teachers with military or special training experience” to be armed to stop potential shooters.

The National Rifle Association also weighed in after the shooting in Maryland, as one of its Twitter accounts on Tuesday highlighted a quote from CEO Wayne LaPierre.

"When it comes to the safety of our politicians, celebrities & sports stars, the answer is clear—armed security. It's the only security solution that is proven to work, which is why #NRA has called repeatedly for trained armed security in every American school," he was quoted as saying.

But NASRO believes school resource officers should be the ones with guns inside schools, saying teachers with firearms likely would have difficulty using them in high-stress conditions, could be mistaken as shooters during incidents and are likely "mentally unprepared to take a life, especially the life of a student assailant.

“NASRO respects the Second Amendment rights of teachers. Nothing in our previous recommendation against arming teachers should be interpreted as advocacy for infringing upon those rights,” it said in a statement in early March, while standing by its position.

Even if school resource officers don’t open fire, their presence can still be effective, Canady said, citing a 2013 incident in which one was credited with saving lives during an assault on Arapahoe High School in Centennial, Colorado, that left one student dead.

A gunman in that shooting killed himself as the school resource officer and a security guard made their way to the library he was inside of. The entire episode lasted around 80 seconds, police said, noting the officer acted as a psychological deterrent.

"A typical shooter in these incidents will shoot until they are confronted by someone in a position of authority, a police officer or a sheriff's deputy, and this individual knew that our school resource officer was in his immediate area," Arapahoe County Sheriff Grayson Robinson had said at the time.

However, some districts, such as New York City public schools, are scaling back on school resource officers altogether.

The last full-time police department officers assigned to the schools are being moved out in favor of community policing units that will now not only be required to monitor the schools, but the neighborhoods around them as well, according to a report from the New York Post.

The report said all schools will still have unarmed safety agents, but parents and teachers are incensed over Mayor Bill de Blasio’s move.

“It’s ridiculous,” local PTA co-president Linda Lovett told the newspaper. “All over the country they are telling you ‘arm the teachers, get an officer in your school.’ New York City had a designated officer and they are actually cutting the program…they are making us less secure.

Canady also told Fox News on Wednesday that it is “extremely concerning that you would remove that presence.”