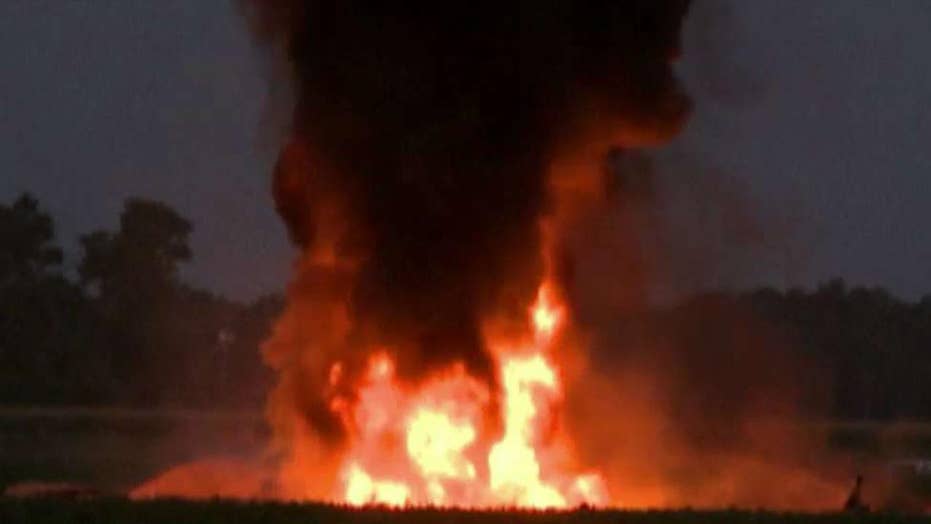 No distress call prior to Marine aircraft disaster

The FBI on Tuesday continued to investigate the deaths of 15 Marines and one Navy Corpsman who were killed when their U.S. military plane spiraled out of the sky and into a Mississippi field on Monday.

A KC-130, used as a refueling tanker, "experienced a mishap" when it corkscrewed into a soybean field about 4 p.m. Monday at a location around 85 miles north of Jackson, the Marine Corps said. The aircraft's debris scattered in a radius of nearly 5 miles.

The Marine Corps said in a statement on Tuesday that 15 Marines and a Navy Corpsman were aboard the aircraft and killed in the crash. Six of the Marines and the Navy sailor were from Marine Corps Special Operations Command (MARSOC), according to the statement.

Their bodies were recovered late Monday, Leflore County Emergency Management Agency Director Frank Randle told reporters. A witness said some bodies were found more than a mile from the crash. The identities of the people killed have not been released.

Equipment that included "various arms ammunition and personal weapons" were also on the aircraft.

President Trump and Vice President Pence offered their condolences to those who perished.

"Marine Plane crash in Mississippi is heartbreaking. Melania and I send our deepest condolences to all!" Trump tweeted Tuesday morning.

Pence wrote on Twitter: "Karen & I are praying for the families of the Marines who lost their lives. These Marines will be in our hearts."

The Marine Corps said the plane originated from Marine Corps Air Station Cherry Point, N.C. and it was unclear what caused the crash.

Alan Hammons, an official at Greenwood Airport, told WNCN that the aircraft suffered a "structural failure" at 20,000 feet. The Clarion Ledger reported that the plane departed from Naval Support Activity Mid-South Base in Millington, Tenn.

An intense fire, fed by jet fuel, hampered firefighters, causing them to turn to unmanned devices in an attempt to control the flames, authorities said. There were several high-intensity explosions.

Aerial pictures taken by WLBT-TV showed the skeleton of the plane burning, producing plumes of black smoke visible for miles across the flat landscape of the delta.

Andy Jones, who works on his family's catfish farm nearby, said he heard a boom and looked up to see the plane "spinning" downward with one engine smoking.

"You looked up and you saw the plane twirling around," he said. "It was spinning down."

Jones said the plane hit the ground behind some trees in the soybean field, and by the time he and others reached the crash site, fires were burning too intensely to approach the wreckage. The force of the crash nearly flattened the plane, Jones said.

"Beans are about waist-high, and there wasn't much sticking out above the beans," he said. "It was one of the worst fires you can imagine."

Jones added the fire was punctuated by the pops of small explosions.