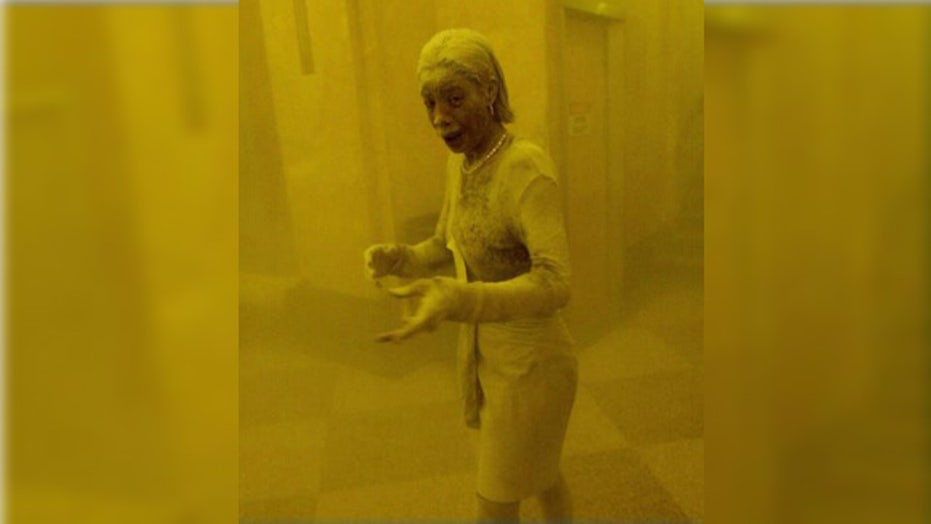 Marcy Borders, a woman whose dust-covered image became a haunting emblem of the Sept. 11, 2001 attack, has died of stomach cancer at the age of 42, family members said late Monday.

John Borders, Marcy's first cousin, wrote in a Facebook post that she "unfortunately succumbed to the diseases that (have) ridden her body since 9/11."

Borders, a New Jersey native, was working for Bank of America on the 81st floor of the World Trade Center's north tower when two hijacked passenger jets slammed into the Twin Towers. Instead of staying at her desk, as her boss had ordered, she fled from the building and into a street scattered with wounded workers.

A stranger pulled her into a building lobby just as the north tower collapsed — and it was then that Agence France-Presse photographer Stan Honda captured her terrified face in a famous photo that has since been seen around the world. For the rest of her life, Borders would be known as "The Dust Lady."

In 2002, Borders told Fox News that she was traumatized by the attack and struggled to cope with her sudden fame from that deadly day.

"When I saw it, I was like: 'Oh my God, I really don't like the image America sees. It shows me,'" she said at the time. "I might have been asking God: 'What do I do? What's going on? What's happening?' It shows fear. People look at this picture and see elegance. I don't see it."

Borders battled severe depression and an addiction to crack cocaine before checking into rehab in April 2011. She was diagnosed with stomach cancer in August 2014 and underwent chemotherapy. Borders told the Jersey Journal last year that she wondered whether her illness could be attributed to the attack.

"I'm saying to myself 'Did this thing ignite cancer cells in me?'" she told the paper. "I definitely believe it because I haven't had any illnesses. I don't have high blood pressure...high cholesterol, diabetes."