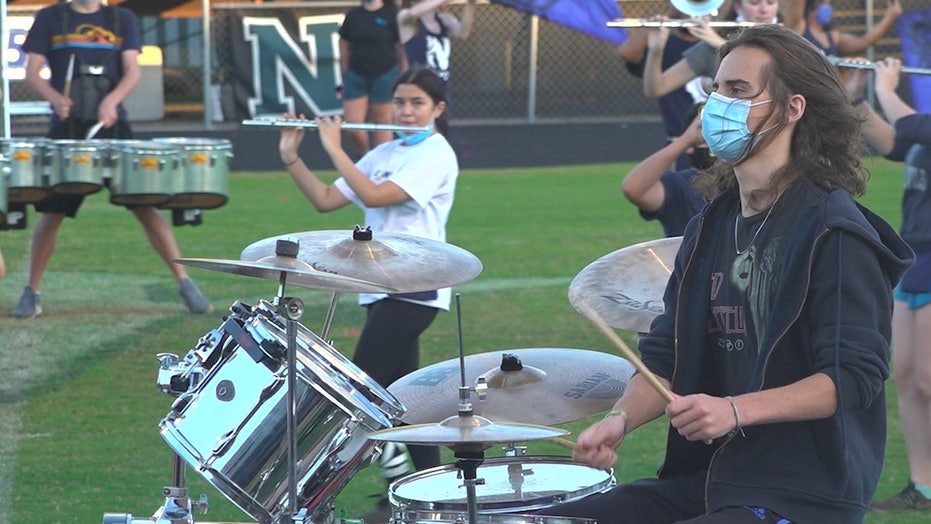 Marching bands playing to a different beat amid the coronavirus pandemic

The coronavirus has silenced dozens of marching bands across the country. However, the high school marching bands that are still playing have been working to adjust to a new normal.

The coronavirus has silenced dozens of marching bands across the country. However, the high school marching bands that are still playing have been working to adjust to a new normal.

High school seniors are feeling the impact more than ever as they prepare for college. In Georgia, Norcross High School senior and drum major Bailey Lesko said she feels lucky to still play her instrument during the pandemic.

“I would have cried a ton if we hadn’t got to do marching band this year,” Lesko said.

Marching band practices and performances are much different from last year, but Lesko said the atmosphere is better than ever before.

The Norcross marching band practicing before its next performance. (Source/Fox News )

“Students have to report super early now and they answer a set questions that the county office and the health department gave to us. And then we take their temperatures so anything that’s over 98 you’re also sent home,” Newman said.

In addition, “Everybody has to stay 6 feet apart all the time, so even when you see the show they're spread out more than they normally would,” Newman said.

Newman said the staff, parents and students are keeping the band going and the seniors on the field are leading the way.

“They were pretty down... but they wanted to have band so bad that they adapted pretty quickly. They have been a huge driving force behind wearing masks and staying 6 feet apart,” Newman said.

Marching band senior Nicholas Avradopoulous said he has seen just how lucky they are. “I’ve realized at other games not many of the other bands are able to play, and it makes me so appreciative of what we have here,” Avradopoulous said.

Nicholas and Bailey both hope to participate in the marching band in college, but the admission process may be different.

“For many years most senior classes have always, I don’t want to say taken for granted, but they have had the opportunity to go and apply for colleges and get scholarships and move in to their dormitories when everything was quote-unquote normal -- but these seniors have not had the autonomy of doing that,” Little said.

But Little said the band is still searching for talented students, and “We do plan on auditioning those students and providing them an opportunity to be a part of our band because one thing that we do know … We do know that this pandemic will not last forever, and once everything subsides we do want a strong band program.”

“Instead of us being able to go into high schools and to work with groups in a hands-on basis, a lot of that has been virtual,” Jones said.

Lesko has met with colleges virtually, but she said it’s just not the same.

“I’m hoping that next year will be normal so that when I go to college and meet these people in person for the first time and I get to experience these programs -- I really hope it’s going to be like what they’ve told me over the phone and what I’ve seen in Zoom calls,” Lesko said.

So far, the Norcross High School marching band has no known cases of the coronavirus.