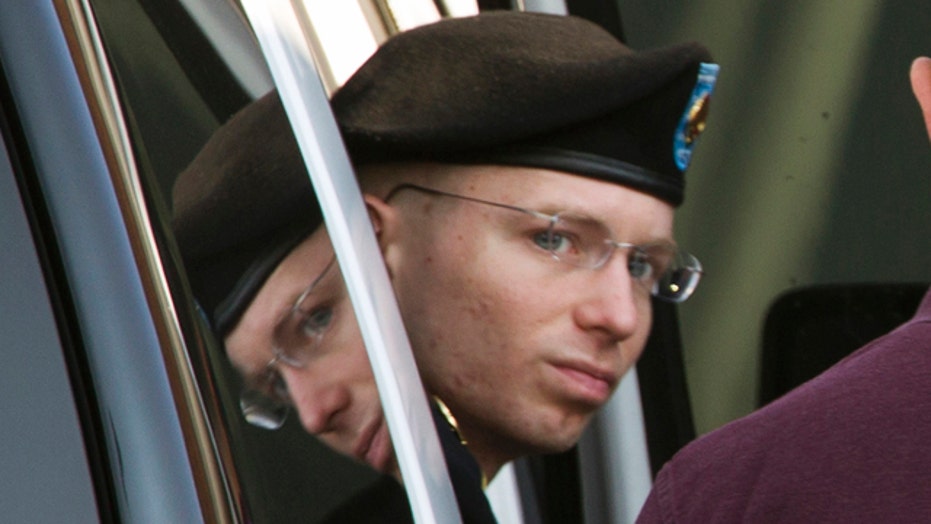 Manning gets 35 years in prison for WikiLeaks case

The Army soldier who leaked more than 700,000 Iraq and Afghanistan battlefield reports and diplomatic cables while working as an intelligence analyst was sentenced Wednesday to 35 years in prison.

Army Pfc. Bradley Manning, 25, who gave reams of classified information to WikiLeaks, faced up to 90 years in prison. He was credited with 1,294 days already served and was and be dishonorably discharged. He could be eligible for parole before he reaches the age of 40.

Flanked by his lawyers, Manning, 25, stood at attention and appeared not to react when military judge Col. Denise Lind announced the punishment without explanation during a brief hearing.

Among the spectators, there was a gasp, and one woman put her hands up, covering her face.

"I'm shocked. I did not think she would do that," said Manning supporter Jim Holland, of San Diego. "Thirty-five years, my Lord."

Before announcing the sentence, Lind warned spectators against any outbursts, saying she would stop the proceedings and expel anyone creating a disturbance, as she has in the past.

She had barely stepped out of the room when guards hurried Manning out through a front entrance and some half-dozen supporters shouted from the back of the room: "We'll keep fighting for you, Bradley" and "You're our hero."

The former intelligence analyst was found guilty last month of 20 crimes, including six violations of the Espionage Act, as part of the Obama administration's unprecedented crackdown on media leaks.

But the judge acquitted him of the most serious charge, aiding the enemy, an offense that could have meant life in prison without parole.

Prosecutors asked for at least a 60-year prison term. Capt. Joe Morrow said in his closing argument Monday that a long prison sentence would dissuade other soldiers from following in Manning's footsteps.

The defense has suggested a prison term of no more than 25 years, so that Manning, 25, could rebuild his life. Defense attorney David Coombs asked for a sentence that "doesn't rob him of his youth."

A small group of people gathered Wednesday morning outside the gates of Fort Meade, near Baltimore, holding posters that read "Free Bradley Manning."

Army Spec. Albert T. Sombolay got a 34-year-sentence in 1991 for giving a Jordanian intelligence agent information on the buildup for the first Iraq war, plus other documents and samples of U.S. Army chemical protection equipment. Marine Sgt. Clayton Lonetree, the only Marine ever convicted of espionage, was given a 30-year sentence, later reduced to 15 years, for giving the Soviet KGB the identities of U.S. CIA agents and the floor plans of the embassies in Moscow and Vienna in the early 1980s.

U.S. civilian courts have ordered life in prison for spies, including Aldrich Ames, a former CIA case officer convicted in 1994 of spying for the Soviet Union and Russia and former FBI agent Robert Hanssen, convicted in 2001 of spying for Moscow.