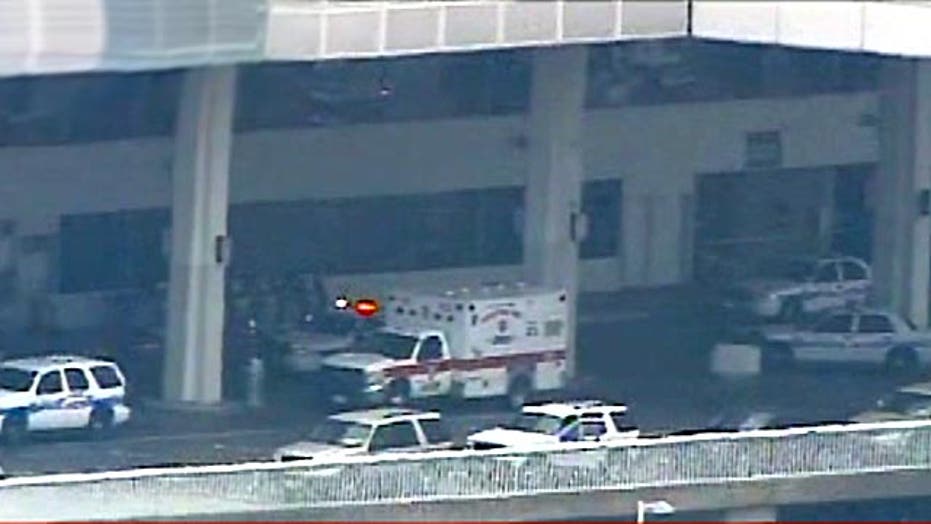 A man who fired shots near a ticket counter at Houston's largest airport on Thursday was killed after being confronted by a law enforcement official, a Houston police spokesman said.

Shots were fired near a ticket counter at Houston's largest airport on Thursday, and the man who was killed after being confronted by a law enforcement official.

It's unclear if the man fatally shot himself or was killed by a Homeland Security agent who had confronted him, said Houston police spokesman Kese Smith. The man's name was not released by police, but they said he was about 30-years-old.

The agent, who was in his office, came out and confronted the man, telling him to drop his weapon, but the man refused, police said.

"The suspect then turned toward the special agent. The special agent, fearing for his safety and all the passengers in the terminal, discharged his weapon at the same time it appears the suspect may have shot himself," Smith said.

The man died at the scene. An autopsy will be conducted Friday.

Darian Ward, a spokeswoman for the Houston Airport System, said some passengers who were scheduled to leave from Terminal B were rerouted to other terminals. The airport also made the announcement on its Twitter feed.

The Chron.com reported that authorities investigating the incident believe it was an isolated event and that no search was being conducted at the terminal.

Houston police responded to a call that there had been a "discharge of firearms" at 1:35 p.m. at Bush Intercontinental Airport in Houston, a police source told  MyFoxHouston.com.

KHOU.com reported that a man had fatally shot himself with an AR-15 near a security checkpoint. Reports indicated that a body was found in the lobby of Terminal B of the airport.

Dale Howard, of Tomball, was at the baggage handling area of the airport waiting for his sister to arrive on an incoming flight when he heard two shots fired from the floor above. A few seconds later, he said he heard three more shots.

"People were screaming. I knew exactly what it was -- gunfire," Howard said.

Police from an adjacent station rushed in, and Howard said he directed them to the floor above.

Greg Newburn, who was in the terminal waiting for a flight to Oklahoma City, said he was sitting in a cafe area when he heard two gunshots and after a pause, several more.

"It seemed like quite a few shots. Everyone was scrambling, running left and running right, turning tables up and hiding behind tables. Nobody knew what was happening. I couldn't tell where the shots were coming from," he said.

Newburn, from Gainesville, Fla., said it took him a few seconds to realize that the shots had come from the terminal ticketing area, near the security checkpoint. Newburn said he didn't see who had fired the shots.