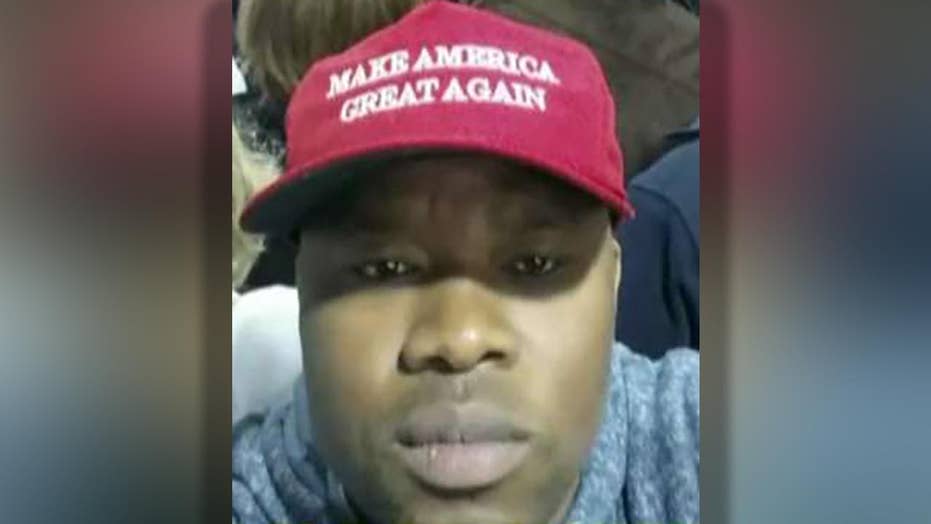 The Maryland man who police say was attacked for wearing a 'Make America Great Again' hat said he will not stop wearing the cap showing his support for President Trump.

Atsu Mable, in an appearance on "Fox & Friends" Wednesday, also said he forgives the two strangers alleged to have gone after him Saturday night in Germantown, outside of Washington, D.C.

“I have a message for love – that Jesus said in the Bible that you must love your neighbor, so I still love them,” he told Fox News. “I think whatever happened to me that day should not happen to anybody.

“I forgive them. I’m ready to make peace with them if I could see them again,” he added.

Jovan Crawford, left, and Scott Duncan Roberson are accused of attacking a man in Maryland because he was wearing a 'Make America Great Again' hat. (Montgomery County Department of Police)

Mable said he was walking off his dinner that night when he was approached by strangers, one of which told him “you shouldn’t be wearing that hat, bro.”

Mable said he then walked away but felt someone punch his back, and a fight ensued. Possessions belonging to Mable were taken by the suspects and destroyed during the brawl, the Montgomery County Department of Police said in a statement.

Officers later tracked down Jovan Crawford, 27, and Scott Duncan Roberson, 25, who were: “attempting to hide among a group of children playing basketball”.

“I like the message that the president brought back in 2015 when he was running,” Mable said.

“I’m very proud of wearing the hat,” he added, noting that he will put it on again in the future.