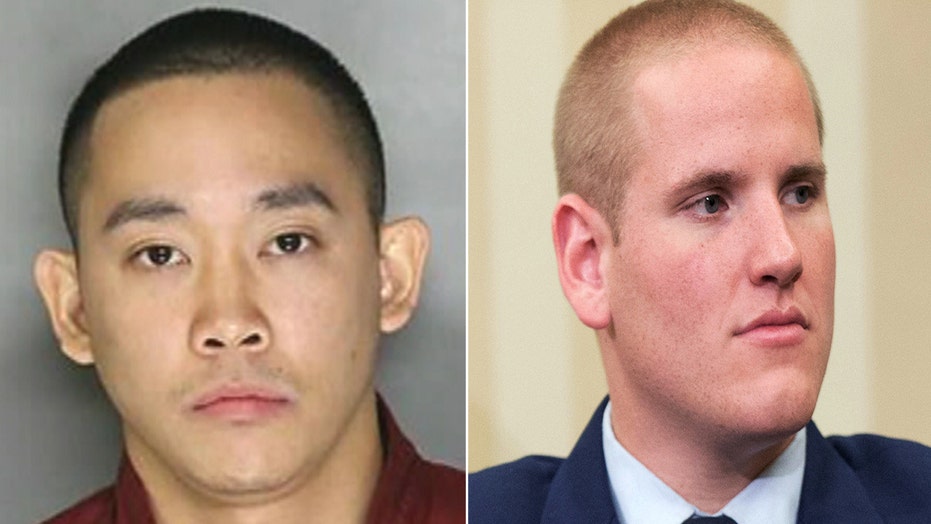 Man accused in attack on Spencer Stone under arrest

Arrest made in stabbing of train hero

SACRAMENTO, Calif. – A tip led police in California's capital city to arrest a 28-year-old man Wednesday in the stabbing of a U.S. airman who was hailed as a hero for helping thwart a European terror attack.

Air Force Staff Sgt. Spencer Stone was knifed on Oct. 8 in a fight near a bar in Sacramento, shortly after nightclub patrons applauded the 23-year-old for his role in tackling a gunman with ties to radical Islam on a Paris-bound passenger train in August.

James Tran, who lives outside Sacramento, is considered the instigator in the brawl that led to the stabbing, police Chief Sam Somers Jr. said at a news conference.

Tran was charged with attempted homicide.

A number of other people were questioned in the attack but none has been arrested, Somers said.

Stone's injuries were so severe that police initially thought he could die. Detectives have been investigating public tips on the case ever since, Somers said.

One tip led to Tran in recent days, and arrest and search warrants were issued Tuesday while he was kept under surveillance.

Stone's mother, Joyce Eskel, said Wednesday that her son was knifed four times, not three as doctors initially said. Doctors "had to saw his chest open" to repair lacerations to his heart and liver and a collapsed lung, Eskel said. One wound came within a half-inch of his spine, she said.

"He's very, very fortunate to be alive," she said, adding that the family is relieved and grateful to police.

Garth Utter, a trauma surgeon at UC Davis Medical Center, confirmed Eskel's more detailed account of her son's injuries, but said the slashing wound near his spine was not considered particularly threatening. Other abdominal and chest wounds were potentially life-threatening, but Stone turned out to have no major organ damage, he said.

Detectives moved in as Tran drove in south Sacramento County and he was arrested without incident. Tran has a previous felony arrest and is affiliated with a gang but that did not play a role in the fight, Somers said.

Investigators have said the assault had nothing to do with the European terror plot and involved an alcohol-fueled fight between two groups in a popular nightclub district.

Somers said Tran and his group did not know who Stone was until they saw news reports later.

Stone was with three women and another man when other clubgoers praised him at Badlands, a nightclub in the Midtown district.

Grainy surveillance video from outside a liquor store about an hour later shows a large man who appears to be Stone fighting a half-dozen people at an intersection.

The fight started as an argument after one of the groups videotaped the other, Somers said without elaborating.

The police chief would not confirm reports that Stone was helping a woman when the argument began but said Stone's history shows that "if he feels that something is inappropriate or wrong, he will take action. I'll leave it that way."

The two parties separated before the fight escalated. During the melee, Tran circled behind Stone and stabbed him multiple times in the back, Somers said.

He faces arraignment Friday on a charge of attempted murder, said Shelly Orio, a spokeswoman for the Sacramento County district attorney. She did not know if Tran had an attorney.

A separate video released by police showed two men and a woman fleeing in a vehicle, which has been recovered, Somers said.

In August, Stone suffered a knife wound to the neck and a severely cut thumb when he and two childhood friends from Sacramento stopped the attempted terror attack.

Stone is assigned to Travis Air Force Base. He was promoted from airman to staff sergeant last week.