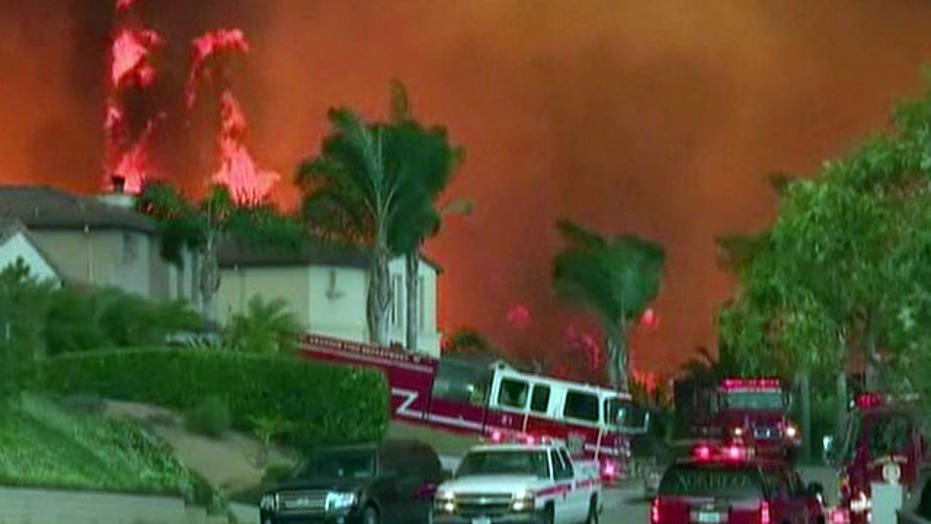 Authorities arrested a man for arson Friday in one of 10 fires that raged through San Diego County this week, as U.S. Marines and their families were forced to flee Camp Pendleton due to a new fire on the base.

Alberto Serrato, 57,  pleaded not guilty Friday to arson in connection with a 105-acre fire in suburban Oceanside -- one of the smaller fires. The fire started Wednesday and is fully contained. Serrato was arrested Thursday in Oceanside and faces up to seven years in prison if convicted.

Tanya Sierra, a spokeswoman for the San Diego County district attorney's office, says witnesses saw Serrato adding brush to the flames near homes but he was not seen starting the fire. The spokeswoman says he has not been connected to any other fire.

Meanwhile, the Camp Pendleton public affairs office told Fox News firefighters are waging an aggressive fight against the newest fire on the base, which is one of three. At least 8,400 people were evacuated from the Marine base, though evacuations were lifted for some early Saturday.

Several camp areas and an infantry school remain under evacuation.

At least 10 blazes broke out in San Diego County between Tuesday and Thursday. Together, the fires burned through more than 10,000 acres in the San Diego area, killing one person and causing more than $20 million in damage.

At least eight houses, an 18-unit condominium complex and two businesses were destroyed, and tens of thousands of people were told to leave their homes.

Investigators are working to determine whether the unusually early and intense outbreak of fires was ignited by something as ordinary as sparks from cars or something as sinister as an arsonist. Six of the fires popped up within hours on Wednesday -- raising suspicions that some had been set.

However, Escondido police Lt. Neal Griffin told a news conference that investigators could not immediately connect the smaller blazes to any of the larger fires burning across the county.

Fire investigators will also study the ground for footprints or tire tracks. They will analyze the pattern of the burn marks, and they will talk to anyone in the area who may have seen something.

Since the fires began Tuesday, 125,000 evacuation notices have been sent. Schools across the county were shut down, and the Legoland amusement park had to close Wednesday. It reopened Thursday.

A 2003 wildfire in Southern California that killed 15 people, destroyed more than 2,000 homes and blackened 300,000 acres in October and November was caused by a lost hunter who set a signal fire.

In the latest outbreak, the first blaze started Tuesday in the upscale San Diego suburb of Rancho Bernardo in a field among swaths of land cleared for new development. It burned through more than 1,500 acres before it was contained the following day.

About an hour after authorities announced the situation was under control, a second blaze erupted at a naval weapons base. Then a tractor-trailer caught fire at a Border Patrol checkpoint. By day's end, eight fires were roaring within a 15-mile radius -- torching canyons and racing past homes in beach communities and inland suburbs.

The hardest-hit areas were in the cities of San Marcos, where a college campus shut down and canceled graduation ceremonies, and Carlsbad, home to Legoland California amusement park.

A dozen wildfires popping up in a single day is not unheard of in the drought-stricken state, but it's a phenomenon usually seen during the dog days of summer.

"What makes the San Diego area fires so unique is that we had tinder-dry conditions and Santa Ana winds in the month of May, and that's unprecedented," state fire spokesman Daniel Berlant said.