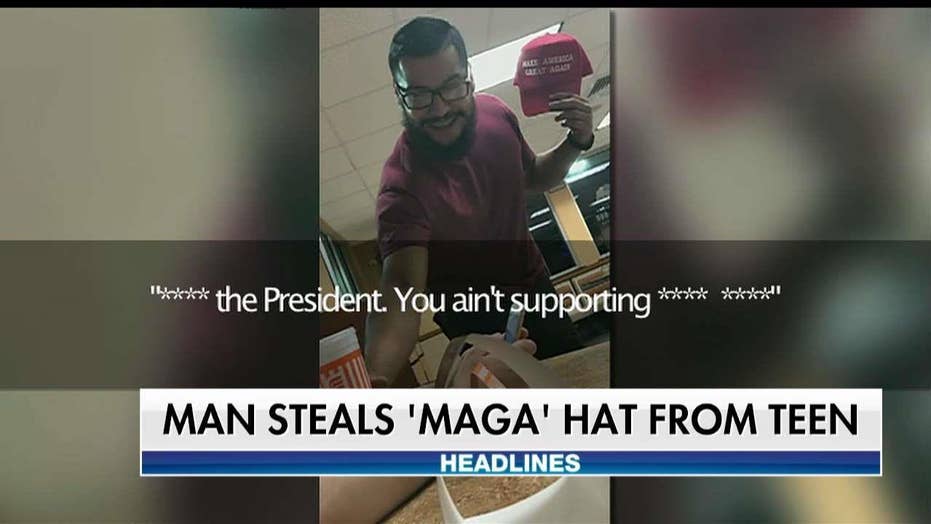 The man accused of hurling a drink in the face of a Texas teen inside a Whataburger restaurant and then stealing the 16-year-old’s “Make America Great Again” hat was arrested Thursday, officials said.

Jail records Friday morning showed Jimenez was detained on a warrant for theft of person. A jail spokesperson later told Fox News that Jimenez's bond was set at $5,000 and he was booked and released on bond the same day.

The incident, which was captured on a video that soon went viral, reportedly happened Tuesday at one of the burger chain’s restaurants in San Antonio.

“You ain’t supporting s--- n----!” Jimenez is heard saying on camera after tossing a large drink in the direction of the person filming the video. He then walks away with the hat while muttering "b---- a-- motherf------" as one of the other teens sitting at the table appears stunned.

The events preceding the video were not clear. Hunter Richard, the 16-year-old teen who says he was wearing the hat, told WOAI some of his hair was ripped off as Jimenez removed it from his head.

There was no word Friday if the original hat has been recovered, but there have been offers for Richard to receive a replacement cap signed by Trump himself.

“If someone can get me this young man’s information I’ll get him a new #maga hat... SIGNED by #potus!!!,” Donald Trump Jr. tweeted Thursday night.

A spokesperson for Rep. Mark Meadows, R-N.C., also told Fox News hours earlier the Congressman was looking to see what he could do to secure the teen a signed hat.

“Don’t let a few left bullies stop you from showing your #MAGA!” Brad Parscale, the president’s 2020 campaign manager, tweeted in reaction to the video.

Whataburger had told Fox News on Thursday it is cooperating with the police investigation.

“We were shocked to see this video and certainly don’t condone this type of customer behavior in our restaurants," the company said. "To be clear, no Whataburger employees were involved or witnessed the incident, and we ask that questions be directed to San Antonio PD as we continue supporting their efforts.”