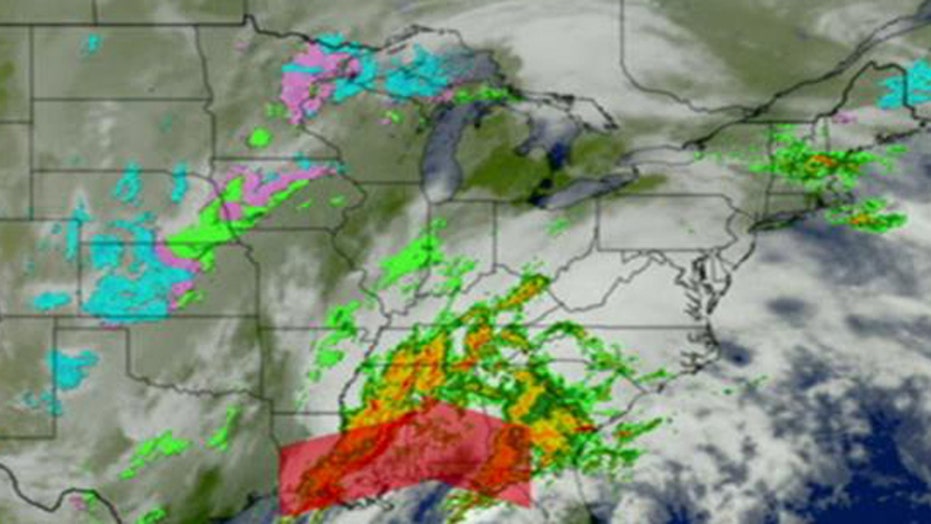 Massive storm slams eastern half of US as holiday approaches

Dreaming of a White Christmas? You might be better off expecting a wet one instead.

A large storm system packing high winds and heavy rain is on track to sweep through the eastern half of the U.S. just in time to disrupt Christmas Eve travel plans, grounding flights and tying up traffic, meteorologists warn.

"It's really a wide-ranging storm system with several weather phenomena that could cause delays across the eastern portion of the country," Mike Musher, a National Weather Service meteorologist, told FoxNews.com on Tuesday. "Unfortunately, it's happening at one of the most-traveled days of the year."

Meteorologists predicted rain-into-snow for parts of the Great Lakes region, with several inches of Christmas Eve snow expected in portions of Illinois. Officials at both airport hubs in the nation's third-largest city readied for the potential of holiday delays and cancellations, particularly with more people expected to fly this year.

"I'd be nervous about the possibility of not being able to get out," said Chicago area meteorologist Charles Mott. "I would definitely make plans about possibly staying put or doing something else."

The National Weather Service predicts Christmas Eve snow from Missouri to Michigan. Three inches of snow could fall in Chicago, where about 4.2 million passengers are expected through O'Hare and Midway international airports during an 18-day holiday travel period ending Jan. 6, said Chicago Aviation Department spokeswoman Karen Pride. That would be a 3 percent increase at O'Hare and a 9 percent jump at Midway compared to last year. Pride urged travelers to allow plenty of time and monitor airlines closely.

By Tuesday evening, FlightAware.com reported more than 5,400 flight delays in the U.S., with more than 500 flights canceled. Many of the affected flights were reported at New York, Philadelphia and Baltimore airports.

Dozens of flights in and out of Philadelphia International Airport were canceled and others saw delays of about two hours due to bad weather and low clouds.

Just west of Green Bay, Wisconsin, a school bus was involved in three-vehicle crash on snow-covered, slick roads. No serious injuries were reported.

In eastern Colorado, Interstate 70 was shut down into Kansas because of strong winds and blowing snow.

Parts of western South Dakota saw snow accumulations of a foot or more through Tuesday morning. Higher elevations in the Black Hills got close to 2 feet.

But not all winter enthusiasts were so lucky.

"We live in South Dakota for a reason," said Amdahl, 27. "We don't have palm trees to put Christmas lights on, we have evergreens. Of course, we need snow. It can melt after the new year."

In New York, light to moderate rainfall will give way into a soaking storm Christmas Eve, and rain was expected through the day in some New England states as well, Musher said.

Musher said the storm system will begin clearing out on Christmas, though some areas of New England and the Great Lakes region may still suffer from rainfall. By the weekend, however, temperatures in the eastern part of the country will rise to five to 10 degrees above normal, and conditions will be sunny by Saturday, he said.

AAA expects 98.6 million Americans to travel 50 miles or more from home during the year-end holiday season, an increase of 4 percent from last year.

Meanwhile, severe storms have killed at least four people in Mississippi and damaged homes and businesses throughout the state, leading Gov. Phil Bryant to declare a state of emergency for two counties.

Bryant's office said thousands were without power Tuesday night around Columbia, which is about 80 miles southeast of Jackson.

Jones County Emergency Management director Marda Tullos said a man and woman were killed Tuesday inside a mobile home in the storm's path.

Watches and warnings were out for a swath of Mississippi, Louisiana and Alabama with the storms moving toward Georgia, including Atlanta, and Florida late Tuesday into Christmas Eve.

Snow from another system fell in some Midwestern states Tuesday, including nearly 2 feet in South Dakota's Black Hills. Wind and blowing snow shut down eastern Colorado's Interstate 70 into Kansas.