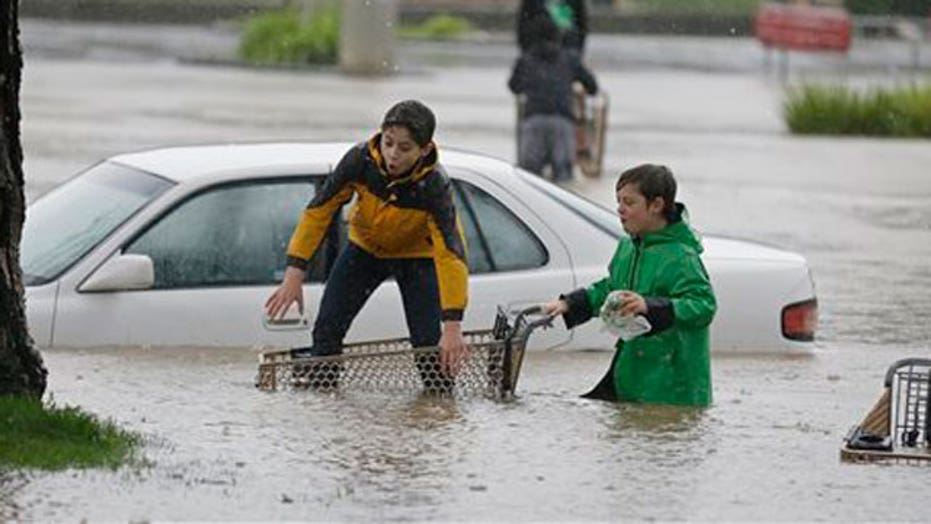 After drenching Northern California the previous day, the storm dumped up to 5 inches of desperately needed rain in Southern California. A landslide left 10 homes uninhabitable and fire officials executed a dramatic rescue of two people from the Los Angeles River.

There were street flooding, traffic tie-ups and wind gusts up to 60 mph in some areas. At its height, about 50,000 customers lost power, though most had it back quickly.

A small tornado hit South Los Angeles as well. The "wind event" occurred at 10 a.m. blowing a roof off a house and causing other damage. No injuries were reported, MyFoxLA.com says.

Meanwhile, the poor weather contributed to a spike in traffic accidents. California Highway Patrol reported a total of 236 vehicle collisions in San Diego County Friday, significantly higher than the average 50-75 on a dry day, MyFox5SanDiego.com reported.

As the storm crept down the coast overnight, its powerful winds caused power outages around Santa Barbara, where the National Weather Service said up to 5 inches fell in coastal mountains. Amtrak suspended service between Los Angeles and the Central Coast city of San Luis Obispo.

In Camarillo, a Ventura County city about 50 miles northwest of Los Angeles, rain was falling at about an inch an hour over hillsides ravaged by a 2013 wildfire. With few roots to hold the soil in place, the deluge caused part of a hillside to give way.

Debris brushed aside concrete barriers crews had set up on the slope and surrounded about a dozen homes with silt, sticks and rocks -- some as large as a couch. The force was so great that two large earthmovers used to set up barriers were swept down to the street, with one nearly buried.

Near downtown Los Angeles, the fire department rescued two people from the storm-swollen Los Angeles River. Orange County fire officials and Los Angeles County sheriff's deputies each pulled a body from smaller waterways, though in both cases the cause of death wasn't clear.

Even after the fast-moving storm cleared out, the risk remained that sodden topsoil on wildfire-scarred hillsides could collapse.

The threat of slides in several other inland Southern California areas led to some evacuations.

It was the second major storm in a week for Southern California and the storm is expected to intensify as it moves across the state.