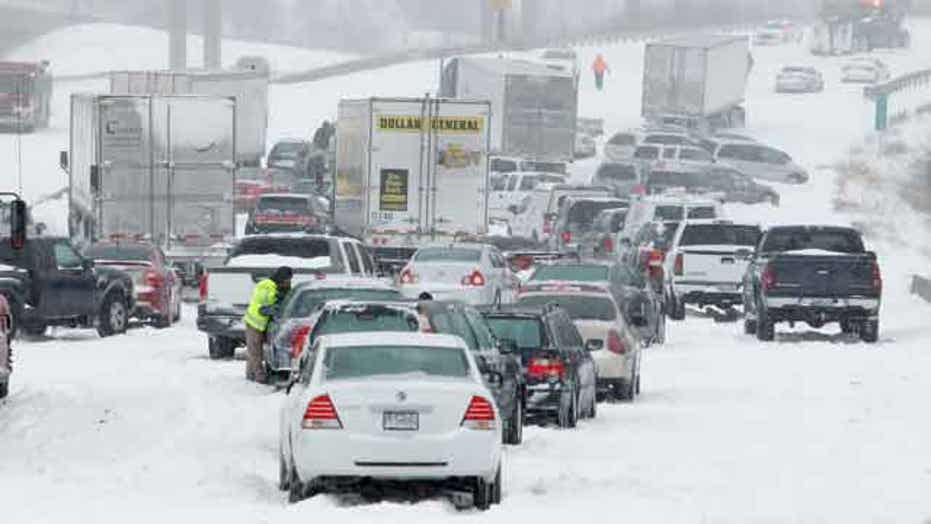 About 270 flights in and out of Chicago's two airports were canceled Friday morning and  inbound flights were held up by an average of 90 minutes due to the snow and ice, according to the airline tracking website FlightAware.com.

One unusual effect of the storm was a sighting of thundersnow in Wichita, Kansas —when lightning coincides with snowfall.  More than 14 inches of snow covered  Wichita—one of the heaviest snowfalls  on record, according to the National Weather Service.

Accidents and slide-offs were reported from Kansas to Michigan. Strong wind gusts off Lake Michigan caused problems for commuters in eastern Wisconsin. Chicago's more than 280 snowplows salted and cleared the city's streets, while commuters slogged through slush to get to their offices.

Many motorists in St. Louis found themselves stuck early Friday as they tried to commute. Fox2Now.com reports that road crews cleared most highways but on-ramps and side roads were causing headaches. Dozens of cars were stranded on the side of roads or in snow banks and some minor accidents were reported.

Missouri's largest snow total was 10 inches, shared by the Kansas City metropolitan area, while more than 13 inches blanketed Northern Oklahoma. Kansas got 17 inches in some areas and farther east in Topeka, 3 inches of snow fell in just 30 minutes.

Areas in the Texas Panandle also had up to 8 inches of snow, and in south central Nebraska, Grand Island reported 10 inches. Arkansas saw a mix of precipitation -- a combination of sleet, hail, and freezing rain in some areas-- and 6 inches of snow in others.

But in some locations, the storm didn't live up to the hype. At the Pilot Flying J station near Interstate 29 in southwest Iowa, shift manager Kelly Malone said Friday his company had taken precautions by reserving seven rooms for employees at the nearby Super 8 Motel.

"We were prepared for the worst, but it didn't happen that bad. To me it was just an average storm, but I'm a person who drives through anything," he said. Iowa's snow totals topped out at 9.7 inches near Sioux City.

While a snow storm in February is not big news in Chicago, it's expected to be the most snow the city has seen so far.

"Our snowblower hasn't even gotten out this winter," Annette Cantu of suburban Chicago's Plainfield said Thursday night. "It's Chicago what are you going to do? 50 one day, and then 20 and snow the next, it's ok," she told MyFoxChicago.com.

State legislatures shut down in Kansas, Missouri, Arkansas, Nebraska and Iowa. Most schools were closed in Kansas and Missouri, and many in neighboring states. University of Missouri canceled classes for two days, one of the few times that's happened in its 174-year history.

While officials in several states advised residents it was safest to stay home, that posed a challenge for some. Jennifer McCoy of Wichita, Kansas loaded her nine children -- ages 6 months to 16 years -- in a van for lunch at Applebee's. "I was going crazy, they were so whiny," McCoy said.

But the storm brought some relief to a region that has suffered through its worst drought in decades. Vance Ehmke, a wheat farmer in Kansas, said the snow was "what we have been praying for."

Climatologists say 12 inches of snow is equivalent to about 1 inch of rain, depending on the density of the snow. Near Edwardsville in Illinois, farmer Mike Campbell called the precipitation a blessing after a bone-dry growing season in 2012. He hopes it is a good omen for the spring, noting that last year, "the corn was just a disaster."