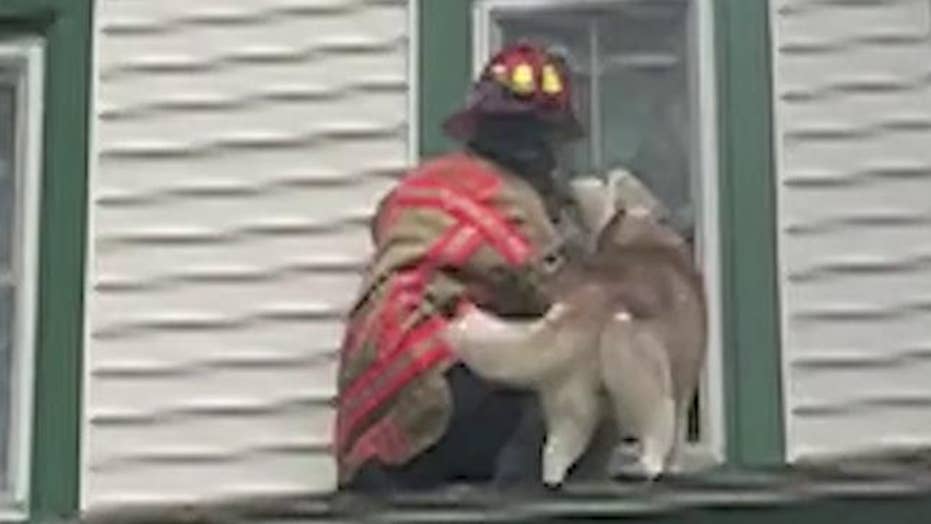 Firefighter gets 'thank you' kiss from dog stuck on roof

Wells Fire Department Captain Jeff Nawfel saves a grateful dog who managed to get out onto his roof.

A firefighter’s rescue of a dog out on a roof in Maine involved a furry personal touch.

“This beautiful dog managed to get out onto the roof of his home thru an upstairs window,” Wells police wrote in a Facebook post Sunday, sharing photos of the canine.

They added, “We received numerous calls but one concerned citizen, Phil Burke, discovered him early on and notified us. Another awesome citizen stood by with the dog until we could arrive on scene!”

Wells Fire Capt. Jeff Nawfel used a ladder to get to the dog and got some "kisses" from the canine, NECN reports.

"Well done, and you got kisses too!!!" one commenter wrote.

"Great job, guys. And, Doggie, behave yourself," one user added.

Wells police also posted video showing the duo up on the roof, which includes Nawfel being licked. The clip has garnered 7,600 views as of Tuesday afternoon.

Officials said there's still no word on whether the troublesome pet is out of the dog house yet.