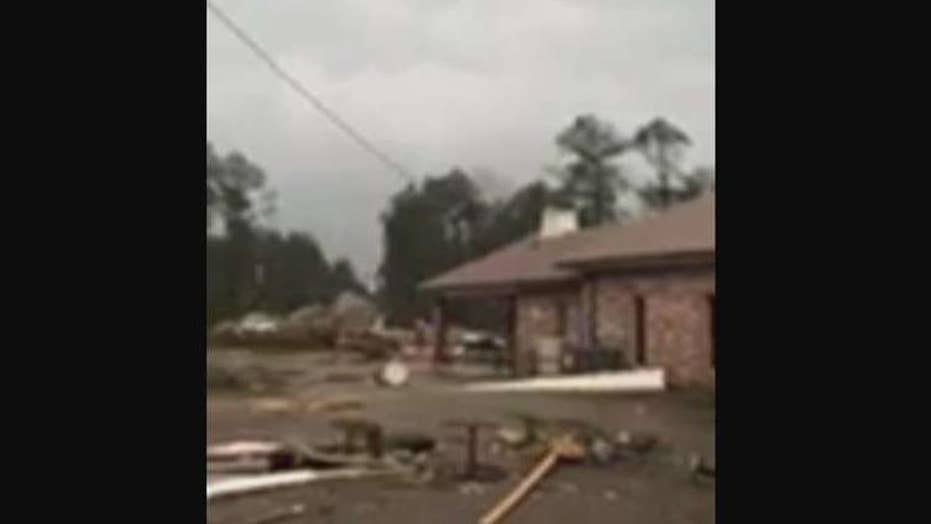 Parish official: One fatality confirmed as tornado touches down in Louisiana

Vernon Parish Chief Deputy Calvin Turner says the death is believed to be the result of a structure failure.

A trail of reported tornadoes broke out across parts of the southeastern U.S. on Monday, damaging homes and churches and killing at least three people, local officials say.

Forecasters said radar showed possible twisters as the "widespread" weather system charged across the region. The Storm Prediction Center reported trees were broken or toppled from Texas to Alabama.

Vernon Parish, Louisiana, Chief Deputy Calvin Turner confirmed earlier Monday at least one death after what appeared to be a large tornado left a path of destruction.

"We've got damage at lots of places. We've got a church where the fellowship hall is torn all to pieces. Some homes are hit. Right now we're having trouble just getting to places because of tress that are down," Turner said.

Damage also was reported about 25 miles away in DeRidder.

"I can confirm two fatalities and houses or mobile homes destroyed," Town Creek Mayor Mike Parker said. "Emergency personnel are working the scene now." As many as five other people were hurt there, officials added.

Entergy Mississippi, an electric utility company, reported more than 2,000 power outages in the state, concentrated mostly west of Jackson along the path of a storm where a tornado was spotted.

Forecasters said an area of northeastern Louisiana and southwestern Mississippi – where about 1 million people live – had a moderate chance of dangerous weather. A tornado watch was issued from east Texas through Louisiana into central Mississippi and southern Arkansas.

A lesser threat, meanwhile, extended into Alabama, western Georgia, the western Florida Panhandle and Tennessee as storms moved eastward, according to forecasters.

Students throughout Alabama, Louisiana and Mississippi were dismissed early, while schools canceled afternoon events and activities as a precaution because of the weather threat.

Forecasters said tornadoes, hail and winds blowing at 70 mph posed the greatest threat as a cold front moved across the region in an easterly direction. Storms that are predicted to begin in the west could last until early Tuesday in the region's east, forecasters said.