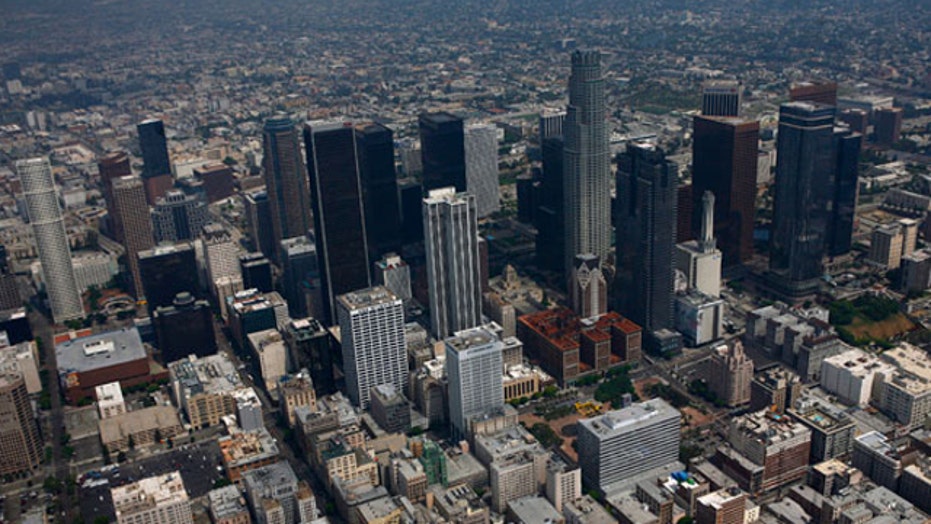 LOS ANGELES – A pre-dawn earthquake rolled across the Los Angeles basin on Monday, rattling nerves and shaking buildings along a 150-mile swath of Southern California but causing no major damage.

The 4.4-magnitude quake was centered 2 miles from Encino and 15 miles west-northwest of the downtown civic center, according to the U.S. Geological Survey.

USGS seismologist Robert Graves called it a "typical" Southern California quake and said expectations were that damage would be slight, if it occurred at all.

Los Angeles police and fire officials said there were no immediate reports of damage.

Encino resident Joann Smith described the initial jolt as "a big crash" that shook her house.

"My dog got out of bed and she came looking for me," Smith said. "She was shivering terribly."

The 6:25 a.m. quake occurred at a depth of about 5 miles. There were several aftershocks, including one of 2.7 magnitude that caused very minor shaking, Graves said.

Marita Ipaktchia was in the kitchen at her Encino home when the quake hit, sending salt and pepper shakers and collectible glass figurines on her shelves crashing to the ground.

"The whole kitchen was shaking," she said "Everything broke. Everything came down."

The quake was felt as far away as Orange County to the south and Santa Barbara to the north.

It was one of the largest to hit Los Angeles since the 6.7-magnitude Northridge quake killed several dozen and caused $25 billion in damage two decades ago, Lucy Jones, a USGS seismologist, told KABC-TV.

"It's not that large by California terms. It's the size of earthquake we have across the state once every couple of months," Jones said. "But we haven't had one like this in LA for quite a while."

"I was in bed and I heard the rumbling. The bed was moving," said Rania Jurdi, a school therapist who lives in Glendale. "I jumped out of bed and ran to the kids' room. Everybody was asleep."

Jurdi said that's only proof that her two teenagers can sleep through anything.

Broadcasters live on the air immediately announced that an earthquake was occurring. Anchors at KTLA-TV took cover underneath their desk before quickly resuming the broadcast by seeking USGS information.

The quake was somewhat unusual because of its location within the Santa Monica Mountains, a 40-mile-long range that crosses Los Angeles and stretches west through Malibu to Ventura County.

Seismologist Egill Hauksson, a veteran researcher at Caltech, said it was the only magnitude-4.4 temblor within the range since recording of earthquakes began.

"The Santa Monica Mountains are a very old rock formation, hundreds of millions of years old, and we sort of think of it as being a very rigid block. And the earthquakes tend to cluster either north of them or south of them but don't seem to be occurring within the mountains," he told a Caltech press conference.

The quake was, however, "par for the course in Southern California" and would likely only be studied briefly to understand how it fits in with previous activity, Hauksson said.

Southern California has been in a seismic lull since significant quakes of the 1980s and 1990s. Whether Monday's quake signaled an end to that "earthquake drought" won't be known for many months because it takes a long period to show whether the rate of activity has changed, he said.