Homicides in Los Angeles up by nearly 200% this year

Los Angeles County Sheriff Alex Villanueva moved his deputies into Los Angeles police territory this week to begin patrols in Venice Beach in an effort to address the homelessness crisis in that area, prompting a scathing response from local leaders.

Venice Beach boardwalk is in the jurisdiction of the Los Angeles Police Department.

In a statement to Fox News, he called the move a "self-aggrandizing stunt" on the part of Villanueva.

"Sheriff Villanueva’s self-aggrandizing stunt is harming and disrupting efforts to house people, as evidenced by the disabled veteran that he loudly proclaimed to house, then left to fend for himself on the streets after destroying his belongings," he said, referencing a local report about a homeless veteran. "Fortunately, professional outreach workers sheltered the veteran in the nearby city-owned shelter that Villanueva supporters had sued to stop.

"It is harmful for the sheriff to strut in and simultaneously interfere with and claim credit for existing outreach and housing efforts. Housing people is made harder by the sheriff’s carnival sideshow and by threats to make arrests," the statement continued.

On Monday, Villanueva visited the Venice Beach boardwalk, which is the jurisdiction of the Los Angeles Police Department. The famous strand has seen an explosion of homeless people living in tents in the past year. Residents and business owners have complained of dangerous conditions at the famed Ocean Front Walk stemming from the encampments, including shootings, fires, explosions, littering, drug use, harassment and assault.

On Tuesday, a street performer was punched by a homeless man on the boardwalk and a security guard was stabbed at a local shop last week, police said.

Some residents previously told Fox News they stopped venturing to the area altogether amid concerns that the LAPD has been hamstrung by elected officials from enforcing laws meant to curb the quality of life issues related to the encampments.

"The city of L.A. created this problem," Villanueva told reporters during his visit. "This is a failure of leadership at the very top."

He said he'd like to see the Venice encampment cleared by July 4. 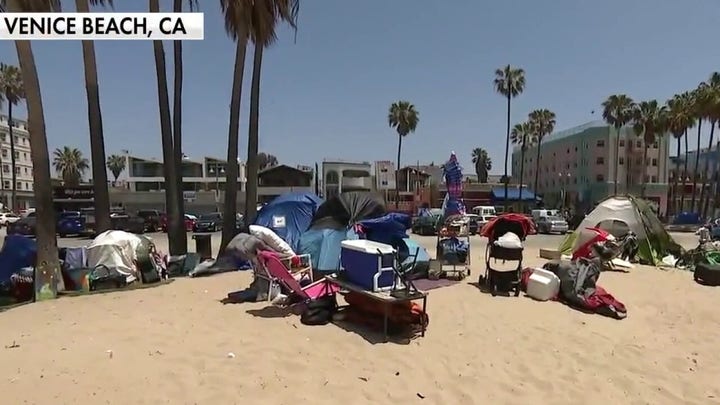 He noted the Venice encampments don't cross over into the neighboring city of Santa Monica. The sheriff's department declined to comment on the matter Thursday but cited tweets by Villanueva addressing what the department's Homeless Outreach Services Team does.

In an interview with KCBS-TV, the sheriff said he didn't want to start a turf war with the LAPD.

"I’m not going to blame LAPD whatsoever," he said. "I think they can definitely do the job. They’re more than capable, have good leadership. However, if they’re hamstrung by politicians that don’t want them to do their job, well then they’re left in a very, very bad situation."

The same day he visited the area, Los Angeles City Councilmember and mayoral candidate Joe Buscaino spoke in Venice to urge a city crackdown in tents in parks, beaches and sidewalks. As he finished, a woman was seen near him holding a knife.

LAPD officers wrestled the weapon away from her and she was arrested.

In a statement to Fox News, the LAPD said it "is committed to working with all of our public safety partner agencies and elected officials to improve the safety of our communities, including efforts to increase outreach and provide needed housing and supportive services in the Venice Beach community and elsewhere."

In an effort to address the homelessness crisis, Bonin has proposed a plan to add "safe camping" sites or "tiny homes" in parks, property at the Los Angeles International Airport and county-owned parking lots.

On Thursday, Villanueva attempted to clear up with the department's homeless outreach team does in response to the report on a Vietnam veteran who said deputies dropped him off a Veteran Affairs hospital, threw away his belongings and cheered as he was being housed.

He stated the HOST team does not provide housing but connects the homeless with service providers.