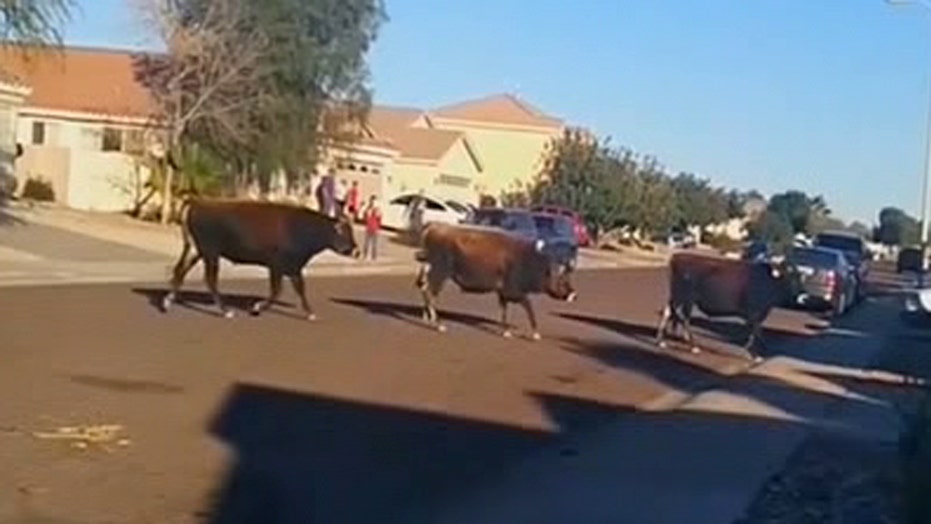 Animals on the loose in Arizona

A FOX 10 viewer captured video of three bulls on the loose in one Phoenix-area neighborhood Thursday afternoon.

"We saw them peeking their head out of the gate," Meghan Garcia said. "We watched them escape... make a great escape, pretty much."

NO HORSE? NO PROBLEM: GIRL TEACHES HER PET COW TO JUMP

Around 4 p.m., Meghan saw three bulls making an escape from a nearby rancher's property in her Glendale neighborhood.

"My first reaction was if someone was going to be walking them," she said. "Like, where is the person supposed to be walking with them to come get them."

Garcia, who couldn't believe her eyes, captured this cell phone video, which shows the bulls wandering through the neighborhood and sometimes even charging at people. Meghan says the bulls even charged at her.

"The neighbor came out across the street and they started running after her and charging at her," Garcia said. "Thank God no one was hurt, but it was intense for a minute."

About an hour after Garcia's typically quiet neighborhood was turned into a scene from a wild west movie, the bulls were captured by their owner.