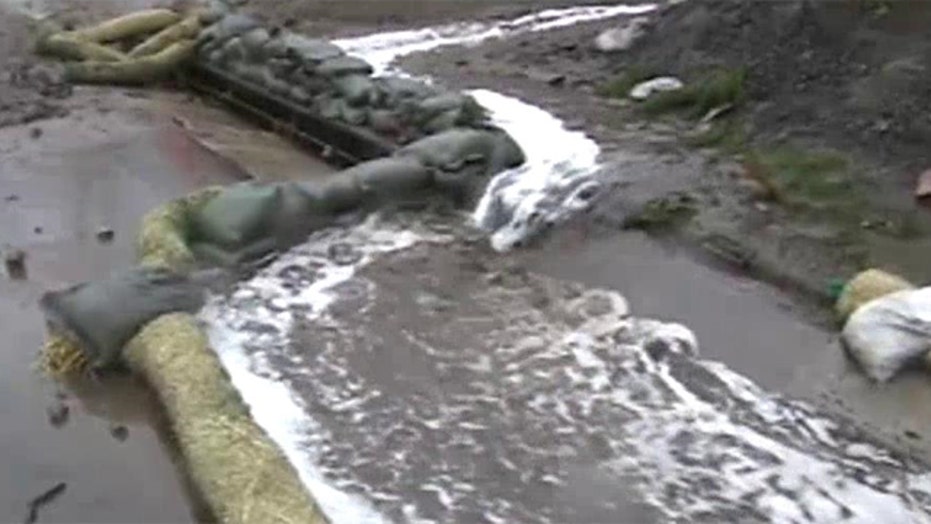 LOS ANGELES – Hours of downpours brought California a dose of relief from a three-year drought with few of the negative consequences the long-awaited storm had threatened, at least so far.

The heaviest torrents fell on Southern California, where the National Weather Service said up to 6 inches of rain was possible in some areas by the time the storm ends Wednesday.

Downtown Los Angeles had received 1.15 inches of rain, breaking a 1961 record for the day, according to the weather service. More than 2 inches fell on Santa Barbara. Totals of around an inch also set daily records in Oxnard and at airports in Los Angeles, Camarillo, Long Beach, Lancaster and Palmdale.

In Northern California, nearly 1 ½ inches fell on San Francisco, where historic cable cars and their 100-year-old braking systems had to be shut down. Stockton and San Jose also saw more than an inch.

Traffic was snarled and flights were delayed in cities around the state.

The rains had brought worries of mudslides and flooding in wildfire-scarred communities that did not immediately materialize, but the saturation from Tuesday's rains and the next round of showers through Wednesday could change that quickly.

In Camarillo Springs, about 50 miles northwest of Los Angeles, gushing water and muddy debris began pouring from adjacent hillsides Tuesday, prompting the mandatory evacuation of about 75 homes for much of the day. The order was lifted around 6 p.m., but authorities urged people to stay away voluntarily.

A handful of residents huddled at a nearby church as they waited to learn the fate of their homes and bemoaned a string of bad luck that began with the 2013 blaze.

"It'll be the locusts next," evacuee Rose Martin told the Ventura County Star. "It's that mountain. You never know what it's going to do."

In Orange County, roughly 100 miles to the southeast, about 60 homes in rural Silverado Canyon were under a voluntary evacuation notice. The area burned over the summer and has been the site of previous mudslides, including one that killed a girl in 2005 and another in 1969 that killed six people who sought shelter in the fire station.

Residents worked together to evacuate large animals, and those who chose not to evacuate were gathering in the tiny town's lone cafe to wait out the rain and keep warm.

"We have to take this seriously because we don't know what's going to happen," longtime resident Connie Nelson said. "We'll just deal with it as it comes. We take care of people up here."

Three years of devastating drought has left the Sierra Nevada snowpack — which counts for most of the state's water supply — at just 24 percent of normal for this time of year. Los Angeles, like many communities, has had less than half of the usual rain in 2014.

It would take many more storms like Tuesday's for the state to make up the balance and pull out of the drought.

Gov. Jerry Brown declared a drought emergency in January and called on residents to reduce consumption by 20 percent. As the storm blew in, new state data was released showing Californians aren't meeting his goal: Statewide water usage was down just 6.7 percent in October.

Meantime, another potential problem awaited Southern California coastal residents: A thick tangle of garbage that gets washed from city streets into storm drains and then onto beaches after major storms.