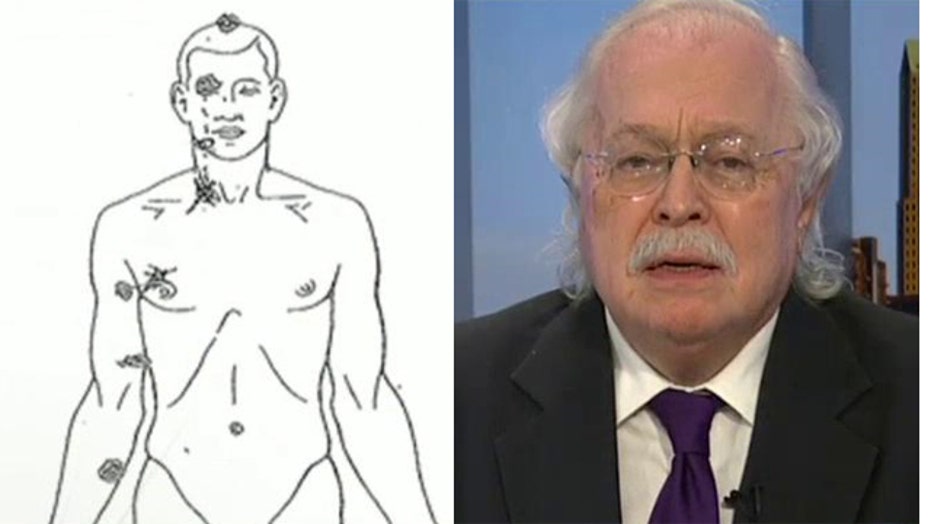 Inside the private autopsy on Michael Brown

Dr. Michael Baden explains his preliminary findings on the police shooting of Ferguson, MO unarmed black teen and why he is not able to conclude whether Brown was surrendering. #Ferguson

Lawyers for the family of Michael Brown said a noted former medical examiner's autopsy backs claims the 18-year-old was trying to surrender when he was killed, but the ex-coroner's own account of his findings stopped short of that conclusion.

Attorneys for the family of Brown, who was shot dead Aug. 9 in a confrontation with police in the St. Louis suburb of Ferguson, held a news conference Monday to unveil a report by Dr. Michael Baden, former chief medical examiner for New York City. Baden's autopsy, commissioned by the family, determined that Brown was shot six times, with the fatal wound striking the top of his head.

“We believe given those kinds of facts this officer should have been arrested,” Attorney Daryl Parks said.

But Baden, who was at the news conference and also spoke, said he had not concluded whether the fatal entry wound's position meant Brown was surrendering to Ferguson Police Officer Darren Wilson when he was killed. Baden said the entry wound atop Brown's skull suggested his head was bent forward when he suffered the fatal injury, and earlier told The New York Times it could be consistent with either surrender or charging at the officer.

A pathologist who works with Baden said Parks' conclusion could be correct, "but we don't know."

Forensic pathologist Shawn Parcells said Brown may have had his back to the shooter, or he could have been facing the shooter with his hands above his head or in a defensive position.

Lawyer Benjamin Crump said Monday that the independent autopsy shows Brown was shot at least six times. But, like Baden, he stressed that the report was preliminary.

County medical examiner's office administrator Suzanne McCune said Monday the autopsy showed Michael Brown was hit in the head and chest. McCune would not confirm whether Brown was hit elsewhere on his body or discuss other details.

A person familiar with the county investigation told The Washington Post that Brown had marijuana in his system.

Full findings of the autopsy aren't expected for about two weeks.

Baden, who has testified in several high-profile cases, including the O.J. Simpson trial, said earlier Monday he was awaiting information from the St. Louis County autopsy -- and other scientific studies -- before making final conclusions about the manner in which Brown died.

Crump said the family wanted the additional autopsy because they feared results of the county's examination could be biased. Crump declined to release copies of the report to the media, and the county's autopsy report has not been released.

"They could not trust what was going to be put in the reports about the tragic execution of their child," he said during Monday's news conference.

He said Brown's mother "had the question any mother would have: Was my child in pain? Dr. Baden shared with her, in his opinion, he did not suffer." He also noted that Brown had abrasions on his face from where he fell to the ground, but "otherwise no evidence of a struggle."

Cases often are presented to grand jurors in a single day. But Magee says Brown's case is complicated and will take longer, though he gave no specific timeline.