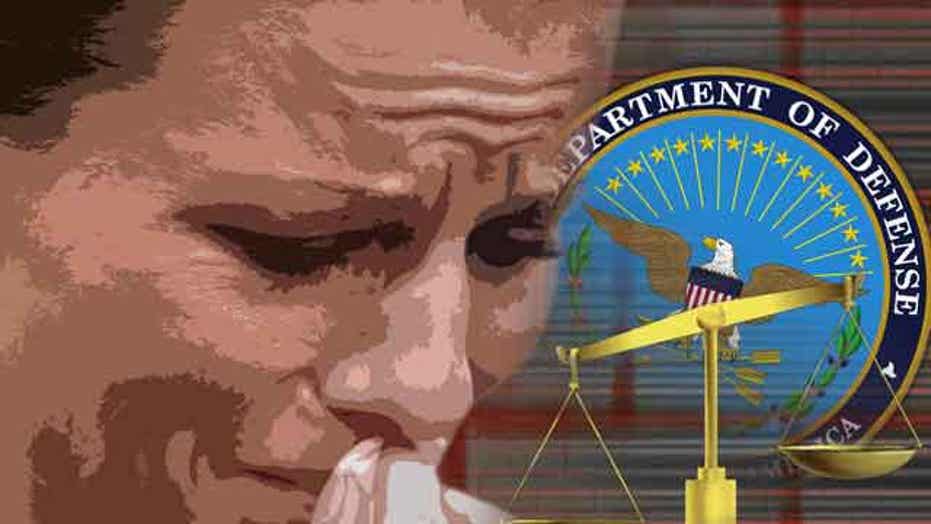 Rep. Bruce Braley comments on the deplorable state of affairs in the military in regards to fighting sex crimes

WASHINGTON – Lawmakers say they're outraged that for the second time this month a member of the armed forces assigned to help prevent sexual assaults in the military is under investigation for alleged sexual misconduct.

The back-to-back Army and Air Force cases highlight a problem that is drawing increased scrutiny in Congress and expressions of frustration from Defense Secretary Chuck Hagel. Lawmakers said it was time for Hagel to get tough with the military brass.

"This is sickening. Twice now, in a matter of as many weeks, we've seen the very people charged with protecting victims of sexual assault being charged as perpetrators," Sen. Patty Murray, D-Wash., said. "It's an astonishing reminder that the Pentagon has both a major problem on its hands and a tremendous amount of work to do to assure victims -- who already only report a small fraction of sexual assaults -- that they are changing the culture around these heinous crimes.

"Secretary Hagel needs to act swiftly to re-examine sexual assault services across the department to ensure that these disturbing betrayals of trust are ended," Murray said.

Hagel said he was directing all the services to retrain, re-credential and rescreen all sexual assault prevention and response personnel and military recruiters, his spokesman, George Little, said after Tuesday's announcement that a sergeant first class at Fort Hood, Texas, was accused of pandering, abusive sexual contact, assault and maltreatment of subordinates.

The soldier, whose name was not released, was being investigated by the Army Criminal Investigation Command. No charges had been filed.

Little said Hagel was angry and disappointed at "these troubling allegations and the breakdown in discipline and standards they imply." He said Hagel met with Army Secretary John McHugh earlier Tuesday and ordered him to "fully investigate this matter rapidly, to discover the extent of these allegations and to ensure that all of those who might be involved are dealt with appropriately."

The Fort Hood soldier had been assigned as an equal opportunity adviser and coordinator of a sexual harassment-assault prevention program at the Army's 3rd Corps headquarters when the allegation arose, the Army said.

"To protect the integrity of the investigative process and the rights of all persons involved, no more information will be released at this time," an Army statement said.

House Armed Services Committee Chairman Howard P. "Buck" McKeon, R-Calif., said in a statement he was "outraged and disgusted by the reports out of Fort Hood."

McKeon, noting he has a granddaughter in the Army, said he saw "no meaningful distinction between complacency or complicity in the military's latest failure to uphold their own standards of conduct. Nor do I see a distinction between the service member who orchestrated this offense and the chain of command that was either oblivious to or tolerant of criminal behavior. Both are accountable for this appalling breach of trust with their subordinates."

He called on Hagel to conduct a review of the military and its civilian leadership "to determine whether they continue to hold his trust and his confidence to lead in this area."

Just last week an Air Force officer who headed a sexual assault prevention office was himself arrested on charges of groping a woman in a Northern Virginia parking lot.

Sen. Carl Levin, D-Mich., chairman of the Senate Armed Services Committee, said in a statement his panel was considering a number of measures to counter the problem, including changes to the Uniform Code of Military Justice, and will act on them next month.

"Tragically, the depth of the sexual assault problem in our military was already overwhelmingly clear before this latest highly disturbing report," Levin said.

"To say this report is disturbing would be a gross understatement," Gillibrand said.

"The sad thing is that this is not a unique case,"Anu Bhagwati, former Marine captain and executive director of the Service Women's Action Network, said in an interview. "Week after week, we're hearing of cases across the branches of military leaders taking advantage of their positions of authority. "

The Pentagon is struggling with what it calls a growing epidemic of sexual assaults across the military. In a report last week, the Defense Department estimated that as many as 26,000 military members may have been sexually assaulted last year, based on survey results.

Of those, fewer than 3,400 reported the incident, and nearly 800 of them simply sought help but declined to file formal complaints against their alleged attackers.

There also is an ongoing investigation into more than 30 Air Force instructors for assaults on trainees at Lackland Air Force Base, Texas, and the recent arrest of the Air Force's head of sexual assault prevention on charges of groping a woman.

An Arlington County, Va., police report said Air Force Lt. Col. Jeffrey Krusinski was drunk and grabbed a woman's breast and buttocks in a parking lot earlier this month. The woman fought him off and called police, the report said. A judge has set a July 18 trial date for Krusinski.

Congressional anger over these incidents and two recent decisions by officers to overturn juries' guilty verdicts in sexual assault cases has precipitated a storm of criticism on Capitol Hill.

Sen. Claire McCaskill, D-Mo., is holding up the nomination of Air Force Lt. Gen. Susan Helms, tapped to serve as vice commander of the U.S. Space Command, until McCaskill gets more information about Helms' decision to overturn a jury conviction in a sexual assault case.