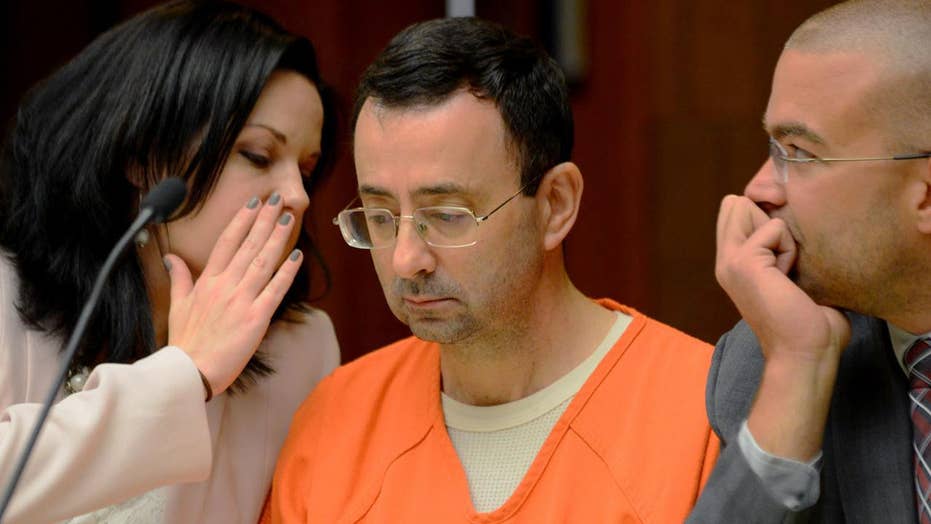 Dr. Larry Nassar, who has a long career of treating college and Olympic gymnasts, appeared in federal court in Grand Rapids, Mich. He pleaded guilty to three charges during his hearing -- two of which carry maximum penalties of up to 20 years in prison.

Nassar is awaiting trial on charges in three separate cases alleging that he sexually molested a total of nine girls, including eight who were gymnasts seeking treatment for injuries. He has pleaded not guilty, and his attorney, Shannon Smith, said Nassar intends to proceed to trial in those cases.

Nassar admitted that he tried to destroy hard drives that contained thousands of inappropriate images last fall, according to his plea deal. Investigators later discovered them in a trash can. Some of the allegations go as far back to the 1990s.

Nassar, 53, acknowledged that he threw out the hard drives and paid $49 to have a laptop computer wiped clean to “impede and obstruct” investigators.

The government said Nassar would not be prosecuted for traveling internationally between 2006 and 2013 with the intent of engaging in sexual conduct with minors as part of a plea deal.

Despite being a USA Gymnastics doctor, Nassar was also a sports medicine specialist at Michigan State.

In addition to the three criminal cases in Michigan, Nassar is also being sued by more than 100 women or girls who have made similar claims against him.