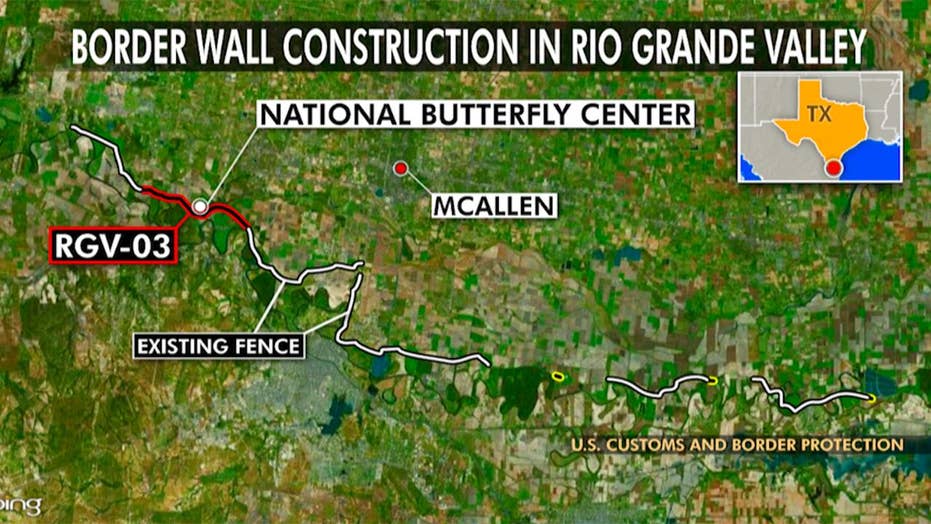 Residents along Rio Grande Valley have mixed reactions to plan

MISSION, Texas – Marianna Trevino-Wright, executive director of the National Butterfly Center, is preparing for the inevitable.

The 100-acre nature preserve on the U.S.-Mexico border sits in the path of a border wall that will soon be built.  In more than three months, government contractors will begin work on the levee road that divides the property.

“They will be clearing all the trees and vegetation from this area to create their enforcement zone. They’re going to excavate the earth and levee, put in an 18-foot vertical concrete slab wall, and on top of that 18-foot steel bollards,” said Trevino-Wright.

In the last two weeks, U.S. Customs and Border Protection, in partnership with the U.S. Army Corps of Engineers, announced the construction of two additional border walls in Hidalgo County in southern Texas. One wall would stretch six miles and cut through the preserve, and the other would span eight miles.

Both contracts were awarded to Galveston-based SLSCO Ltd. The two projects, totaling $312 million, would begin in February.

The National Butterfly Center in Mission is just one of several places that would be affected by the new border wall.  (Fox News)

The government in the beginning stages of building the border wall, recently started issuing right of entry requests, giving them the right to explore the land to figure out where to best put up the wall.

That has set up a potential battle between the government and longtime landowners in the area where the wall will go up.

“For some of (the landowners), the land has been there for generations. It’s very meaningful to them,” said Efren Olivares, legal director for Racial and Economic Justice at the Texas Civil Rights Project, who has been working with several other landowners in the Valley, advising them on their rights and the government’s right of entry requests.

“That’s why they don’t want it destroyed by building a wall through it.”

Some believe the wall would degrade their property.

“In some places, the habitat would be bulldozed entirely.”

The expected construction site in the National Butterfly Center is located about one mile north of the Rio Grande River, which divides the United States and Mexico. In October, the Trump administration waived 28 environmental and public-health laws to make way for the construction of 18 miles of border wall.

While some local landowners here are against the wall, others are in favor of it, arguing they are fed up with migrants illegally entering the country through their land.

The new wall would run along this levee road of the National Butterfly Center, separating 70 acres on the southern section of the levee.  (Fox News)

Othal Brand, president of Hidalgo County Water Improvement District 3, also received a right of entry request – but he was happy about it.

“Some people say ‘oh, you want a wall?’ I believe in securing the border,” Brand said. “For those that live in a city, they can have a level of security and safety. But those of use that work outside of the city and work along the river, it is a totally different environment.”

Brand, who has lived and worked along the river for generations, already has a border wall running through his land. He said he noticed a drop in illegal activity after it was built.

Conservation groups have filed a lawsuit against the Trump administration for the move, saying it will destroy the area’s wildlife and natural habitat.

But, security experts believe there’s a reason why the locations were chosen.

“I do understand the unfortunate nature of some of these locations. On the flip side, though, you’re having these walls constructed in areas where you have heavy smuggling operations in both directions, which I think is an important aspect to remember here,” said Fred Burton, chief security officer at Stratfor.

U.S. Customs and Border Protection have called the Rio Grande Valley Sector the busiest in the country for illegal activity.  (Fox News)

U.S. Customs and Border Protection has called the Rio Grande the busiest sector in the country. In the 2017 fiscal year, they arrested 137,000 illegal border crossers and seized 260,000 pounds of marijuana and 1,192 pounds of cocaine.

CBP said they’ve met with landowners not only to request access to the property for survey but to also listen to their concerns.

“Concerns are captured in order to incorporate them into the design of the wall,” CBP officials said.

Olivares is pushing for the CBP to hold an open community meeting, which he said has not been done. He said the format would allow for more productive dialogue instead of individual meetings with agents.

“We are trying to tell them (the landowners) that they have rights,” Olivares said. “They don’t have to do what the government tells them to do.”