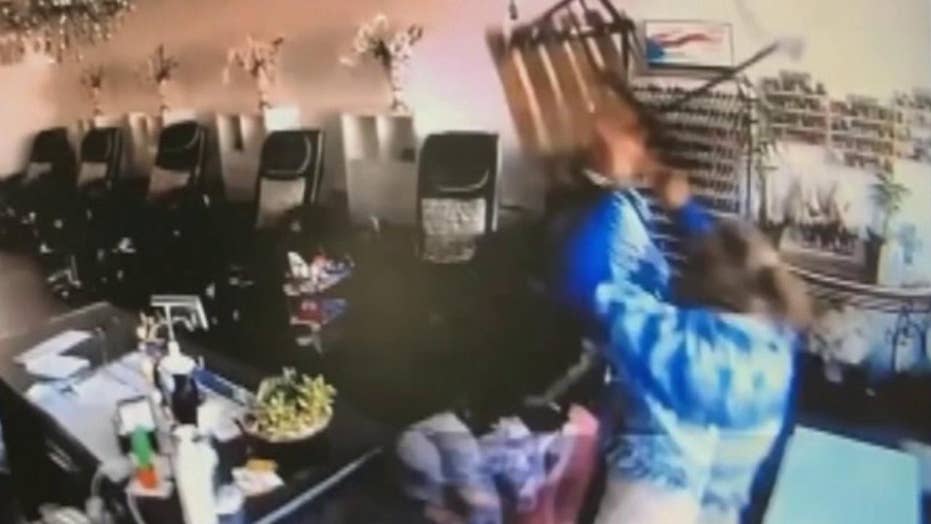 The suspect was arrested by the LAPD.

When a man walked into a Los Angeles-area nail salon and started hitting three female employees for no apparent reason, the women jumped into action.

Surveillance video shows the women using purses as shields, grabbing the man's legs and repeatedly hitting him with wooden chairs as he continues to throw punches.

"The victims were involved in an intense fight for their life with the dangerous suspect," the Los Angeles Police Department (LAPD) said in an online statement about the incident. "The suspect punched the victims several times."

Aranda then stole the keys to the man’s 2007 gray Toyota 4 Runner and fled the scene in the man's vehicle, according to the news release.

But the suspect made a mistake when he decided to walk into what appeared to be an empty nail salon. The three nail salon workers, along with employees from a neighboring business, continued to fight the suspect and eventually apprehended him until police arrived and took him into custody.

"Great teamwork between the community and LAPD Van Nuys Division officers in arresting a violent carjacking suspect that also assaulted multiple victims at a local nail salon," LAPD posted on its official Facebook page on Feb. 3, along with the surveillance video.

The minute-long video of the incident has been viewed more than 6,600 times since it was uploaded to YouTube on Feb. 1.

Police are still searching for the stolen vehicle. Anyone with information about the incident is asked to contact the detectives in charge of the investigation at (818) 374-0081.