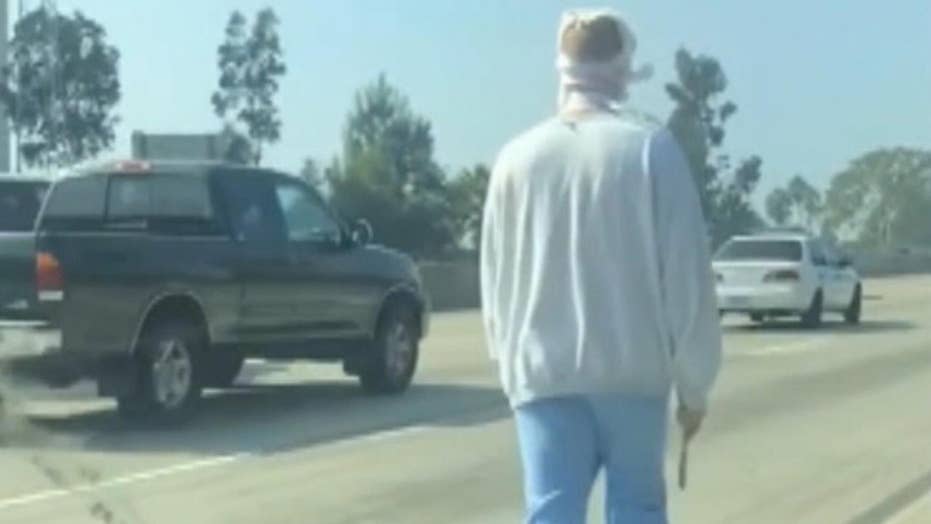 Los Angeles woman shaken when she sees a man with a bandaged head and hand wandering the freeway carrying a knife with his eyes closed.

A knife-wielding man seen with bandages covering his face and wearing hospital scrubs seen wandering on a Los Angeles freeway this week was not playing a pre-Halloween prank, authorities said.

The unknown man was seen walking in the middle of traffic on Interstate 10 as passing vehicles slowed down around him. A motorist recorded video of the incident on her cell phone, FOX 11 Los Angeles reported.

"This is just a bizarre coincidence like walking dead scenario. This guy is in the middle of the highway - even if it is a prank, he is not mentally sound," driver Lisa Shields said. "Tape around the head. Bandaged head, bandaged left hand, and carrying something in his right hand which I got close enough to see was a knife."

Shields said she pulled beside the man and saw that his eyes were closed. She called 911 soon after.

A spokesperson for the California Highway Patrol said the incident was not a prank, the Los Angeles Times reported.

Shields said she was told that the man was mentally ill and had been picked up by authorities and taken back to a hospital, the station reported.

"It was very intense. Height of traffic. People were honking - it was classic LA," Shields said.

The man was taken to a hospital on a 72-hour mental health hold, according to the Times.

His identity was not released.