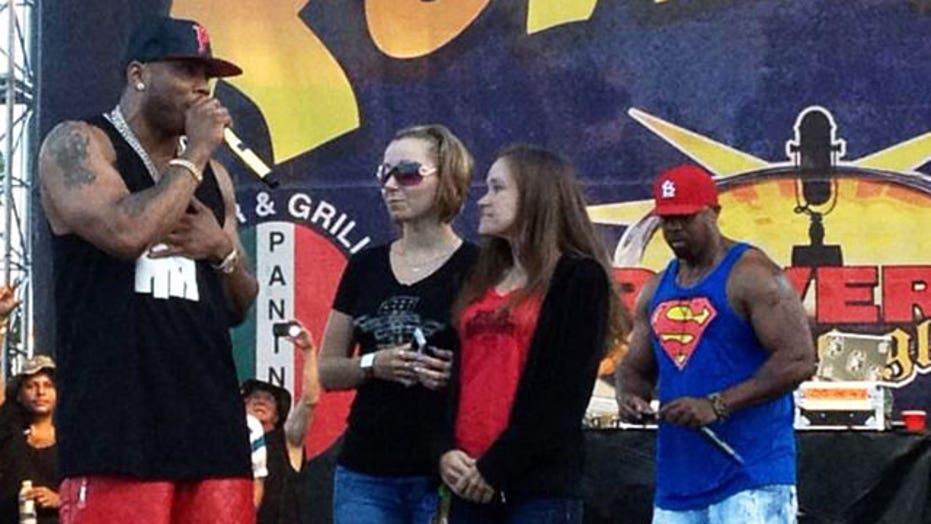 CLEVELAND – One of three women held captive in a Cleveland home for a decade made her first public appearance at a concert featuring the rapper Nelly a day after her abductor pleaded guilty to kidnap and rape charges.

Amanda Berry showed up at the daylong RoverFest concert in Cleveland on Saturday night, walking on stage with her family and waving at the cheering crowd. Wearing sunglasses and dressed in jeans and a black T-shirt, Berry smiled broadly while acknowledging the applause, but she didn't address the crowd. Nelly called Berry back to the stage after his music set.

The appearance came a day after Ariel Castro, a former school bus driver, pleaded guilty to 937 counts in a deal that will send him to prison for life without parole, plus 1,000 years.

Berry, now 27, Gina DeJesus and Michelle Knight disappeared between 2002 and 2004 when they were 16, 14 and 20 years old. They escaped in May when Berry kicked out part of a door and called to neighbors for help.

Shane French, the host of the syndicated talk radio show Rover's Morning Glory on WMMS in Cleveland, told The Associated Press in a telephone interview Sunday that he was surprised when Berry showed up at the annual festival. French, who goes by the name Rover on radio, said he had issued an impromptu invitation on his show a few weeks ago but didn't know she was listening.

"I just said that she had 10 years of partying to make up for and she should come," French said.

He said he was surprised when security guards told him Berry had arrived.

French said Berry at first refused to go on stage but then agreed and asked if he would go with her.

"She didn't say why she decided to come, but some of her family members told me they listen to my show every day and had been to RoverFest in the past," French said.

He said a couple of the women with Berry cried, overcome by the crowd's cheers for Berry.

"I didn't see her cry, but I think she was pretty overwhelmed by the response that the crowd gave her," he said of Berry. "She just seemed to be having a great time."

French said he hasn't invited her to appear on his radio show.

"I figured that when she want to tell her story, she'll make the arrangements, and it would have been pointless to even ask," French said.

Castro, 53, who was arrested and jailed shortly after the women escaped, was accused of raping and beating the three repeatedly. He also fathered a 6-year-old daughter with Berry, authorities say.

The women said they were relieved by the conviction and looking forward to the end of the legal proceedings.

Each said she had been kidnapped after accepting a ride from Castro, who had remained friends with DeJesus' family and attended vigils over the years marking her disappearance.

Castro was accused of restraining the women, sometimes chaining them to a pole in a basement, to a bedroom heater or inside a van. The indictment included two counts of aggravated murder related to accusations that he punched and starved one of the women until she miscarried.

Earlier this month, the three women offered thanks on YouTube for emotional and financial backing they've received since going "through hell and back."