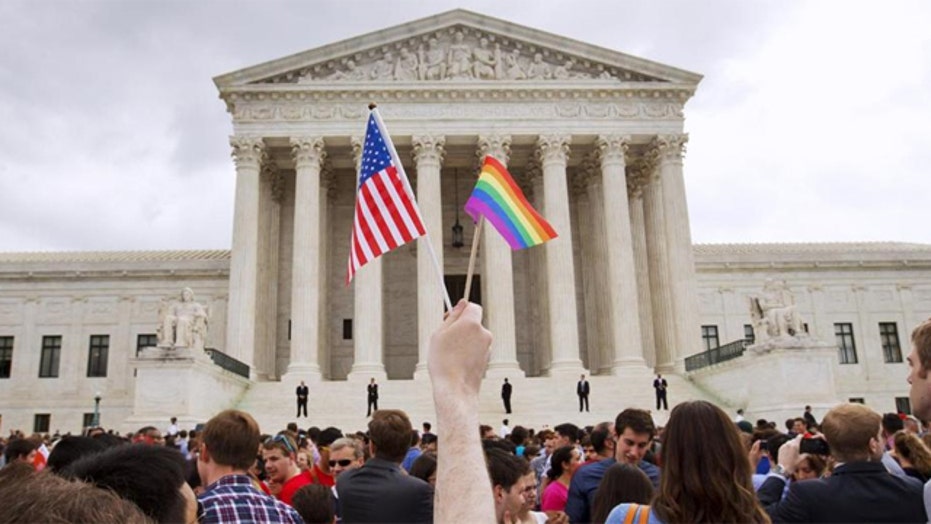 The fight in Rowan County began soon after the Supreme Court legalized gay marriage nationwide in June. County Clerk Kim Davis cited her religious beliefs and decided not to issue marriage licenses to any couple, gay or straight. Five couples sued in federal court, and legal experts likened the case to the resistance some local officials in the South put up five decades ago after the Supreme Court legalized interracial marriage.

Davis wasn't at her office Thursday, but deputy clerk Nathan Davis said the office was advised by its attorneys with the Christian law firm Liberty Counsel to continue refusing same-sex couples as it appeals.

"Kim Davis is just an example of what's going to be happening not only to other clerks but to other people who are going to be confronted with this issue and we think that this is a serious matter that needs to be decided by a higher court, even the Supreme Court," said Liberty Counsel founder Mathew Staver.

James Yates and William Smith Jr., a couple for nearly a decade, were the second pair turned away Thursday. They also were turned away a month ago.

They described a disconnect between the clerk's office and their experience in the community of Morehead, a college town they say has long been open and accepting. They held hands as they walked into the clerk's office, and gay rights activists shouted "Good luck!" from the street, holding signs reading "clerk not clergy" and "obey the law."

The couple joined the protesters after the office refused to give them a license.

"I still get frustrated sometimes, but then I take a deep breath and go on. I know it's going to get resolved. It's just a matter of when," Yates said.

In Kentucky, county clerks issue marriage licenses, and someone else must "solemnize" the marriage. Then the license can be filed with the county clerk.

Davis argued that issuing a same-sex marriage license that contains her signature is the same as her approving the marriage, which she said violates her Christian beliefs.

Davis, elected last November as a Democrat, took over the office from her mother, Jean Bailey, who served as county clerk for 37 years, according to the Morehead News. Davis worked under her mother as a deputy clerk for 26 years. Deputy clerk Nathan Davis refused to say if he is related to Kim Davis.

Judge Bunning said in his ruling Wednesday that Davis has likely violated the U.S. Constitution's ban on the government establishing a religion by "openly adopting a policy that promotes her own religious convictions at the expenses of others."

"Davis remains free to practice her Apostolic Christian beliefs. She may continue to attend church twice a week, participate in Bible Study and minister to female inmates at the Rowan County Jail. She is even free to believe that marriage is a union between one man and one woman, as many Americans do," Bunning wrote. "However, her religious convictions cannot excuse her from performing the duties that she took an oath to perform as Rowan County Clerk."

Attorneys for the couples said they were considering asking the judge to hold Kim Davis in contempt, which could bring a hefty fine or the threat of jail time.

Democratic Gov. Steve Beshear has told the clerk to issue licenses or resign.

Laura Landenwich, an attorney for the plaintiffs, said the 28-page ruling reveals that the judge combed through Davis' legal arguments and rejected each. Bunning said that although couples could get marriage licenses elsewhere, "why should they be required to?"

He noted that the surrounding counties require 30 minutes or one hour of travel and that there are many "in this rural region of the state who simply do not have the physical, financial or practical means to travel."

Bunning said state law does not allow the county judge-executive to issue marriage licenses unless Davis is absent from her job, and Bunning refused to deem Davis absent because she has a religious objection.

After Yates and Smith were told that Kim Davis was on vacation Thursday, they marched to Rowan County Judge Executive Walter Blevins' office.

He explained that his office isn't equipped to issue licenses. He also said that because deputy clerks are at work, he wasn't sure his signature would be valid.

Blevins has been critical of Davis. He shook the couple's hands and told them: "I apologize that you had to come today and walk away empty-handed."