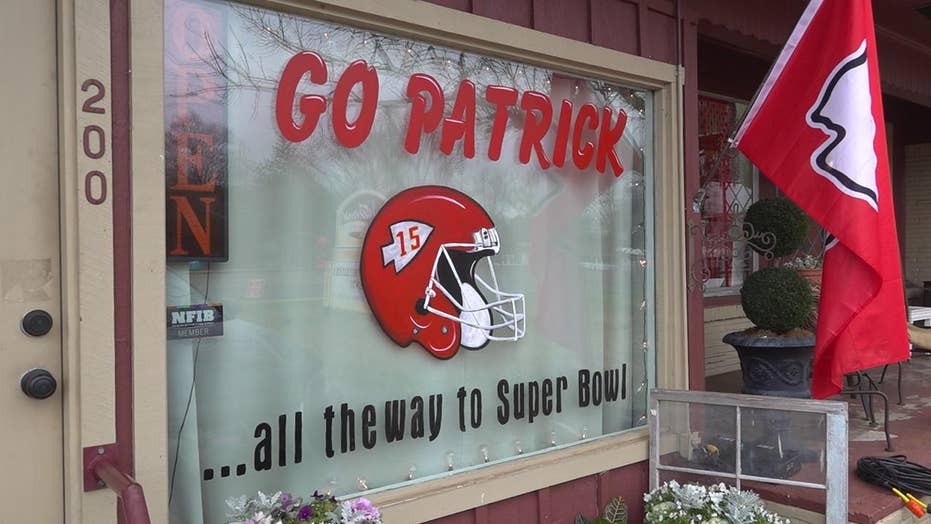 Patrick Mahomes grew up in Whitehouse, Texas where they are supporting his Super Bowl run.

WHITEHOUSE, Texas -- As people are flocking to Miami for Super Bowl LIV weekend, the home city of the Kansas City Chiefs quarterback is getting in on the excitement.

Patrick Mahomes grew up in Whitehouse, Texas, and attended Whitehouse High School, where he was a Wildcat before heading off to Lubbock to play football at Texas Tech. He later started playing for the Chiefs.

His hometown has become his most avid cheerleader, with "Go Patrick" signs and other Mahomes memorabilia on storefronts, front lawns, and even a tire shop.

Adam Cook, who is now the athletic director for Whitehouse Independent School District, was Mahomes’ football coach in high school.

“Patrick’s senior year was my first year as head coach,” Cook said. “Patrick was a very competitive young man, probably one of the most competitive athletes that I have been around.”

The Chiefs quarterback was a multi-sport athlete in high school, bring several awards back to his district before graduating in 2013.

“When people ask me if I am surprised at where is at today, I would say no,” Cook said. “He has been so focused, he got a vision at a young age of what he wanted to do and who he was and right now he is living out that vision.”

“I still text Patrick, he is a professional athlete and his time is very important so I don’t call him, but we text back and forth. Every day I send him a scripture, I started that when he was a freshman,” Cook said.

Cook said while he plans to send him a scripture on Super Bowl Sunday, he doesn’t know yet what it will be, but he does know what won’t be included.

“Last year, I put on one of the [texts] ‘Go Chiefs’ and things didn’t work out that game, so I won’t be doing that this time,” Cook said.

Cook left Thursday to watch Mahomes take on the San Francisco 49ers on Sunday thanks to tickets given to him by Arizona Cardinals head coach Kliff Kingsbury, who recruited Mahomes to play for Texas Tech University.

“I feel like it is my job to go to this game and represent all of Whitehouse and Patrick’s friends and family and fans that have watched him play,” Cook said. “I am just excited to see that boy run out of that tunnel.”

The City of Whitehouse will be also be cheering on Mahomes and the Chiefs as well.

“My family is actually big Cowboys fans, but I think it’s an unsaid rule that you have to support him because he is from here,” said Sarah Feder.

Feder owns the Daily Fix Nutrition on Whitehouse and has been making gold and red nutritional drinks to support number 15. The city also is decked out with signs, t-shirts, flags and window paint.

The City of Whitehouse, Texas gets ready for Super Bowl 54.

“We are in his hometown so it’s like, who wouldn’t want to support,” Feder said.

Community members will be getting together at a local restaurant Sunday for a watch party.