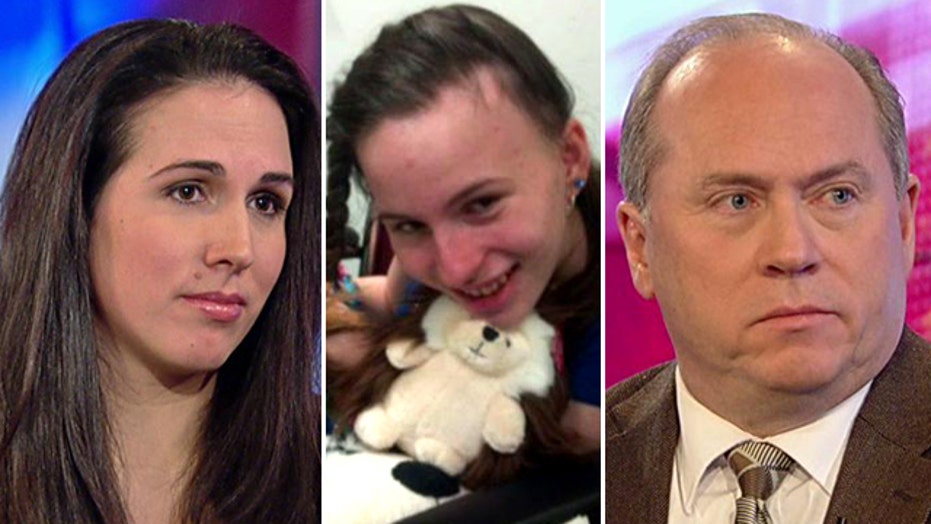 The teen at the center of a custody battle triggered by differing diagnoses by two Massachusetts hospitals was transferred Monday from the Bay State to a facility in her home state of Connecticut, her family told FoxNews.com.

The transfer of 15-year-old Justina Pelletier to a facility in Thompson, Conn., comes a day after the family claims they were denied a visit with their daughter in her Framingham, Mass., facility on Mother's Day.

"She needs medical and physical therapy, which she hasn't been getting. This is just a lateral move," her father, Lou Pelletier, told FoxNews.com as he was traveling Monday from the family's West Hartford home to see his daughter.

The Pelletiers said the new facility is "only 15 minutes closer" than where Justina was being held in Massachusetts. The girl is supposed to arrive at the JRI Susan Wayne Center for Excellence in Thompson by 2:30 p.m., her father said.

The Massachusetts Department of Children and Families took emergency custody of Justina on Valentine’s Day 2013 after doctors at Tufts Medical Center, which had been treating her for a rare condition, and doctors as Boston Children’s Hospital, clashed over the cause of her medical problems, which included difficulty eating and walking.

"This weekend, we were working with Justina and her family to ensure Justina would be able to make a successful transition from Wayside to the facility closer to her family and home in Connecticut," the Massachusetts Department of Children and Families said Monday in a statement. At JRI, she will receive medical, educational and rehabilitation services."

Justina was taken by ambulance to Boston Children's Hospital because she was in a wheelchair at the time and a heavy snowstorm was blanketing the region. To her family's surprise, she was diagnosed with somatoform disorder -- a mental condition in which a patient experiences symptoms that are real but have no physical or biological explanation.

The Pelletier family rejected the new psychiatric diagnosis and wanted to bring Justina back to Tufts. After tempers flared between the Pelletiers and staff at Boston Children's, the hospital notified the state that it suspected the parents of medical child abuse.

The girl was kept at Boston Children’s psychiatric ward for nearly a year before being moved to the Wayside Youth and Family Support Network facility in Framingham, Mass.

In March, Massachusetts juvenile court Judge Joseph Johnston issued a four-page ruling blasting Pelletier’s parents for being verbally abusive and complicating efforts to bring the family together. The Pelletiers, meanwhile, have claimed the Bay State bureaucracy has been aligned against the family from the beginning.

Pelletier has claimed Johnson ignored the testimony of his daughter's original doctors, who stand by the diagnosis of mitochondrial disease. Since the ordeal began, more than a year ago, the Pelletiers have only been allowed hourly visits each week with their daughter, whose condition, they say, has deteriorated. She has not attended school or church since the family lost custody of her, he said.

Secretary of Health and Human Services John Polanowicz announced last week that Justina will be transferred to the Connecticut facility as part of a multi-step process in reuniting her with her family. A judge will make the final decision to return Justina to her family.

Justina's parents, however, have claimed the move is "not at all meant as a step toward regaining custody" and called it "barbaric."